We were told before the start of this stretch that it was known as one of the least scenic and hottest portions of the trail. Huh. We’ll see, I thought. I always hear stuff about each section and I try to leave my expectations broad.

The first day started with two miles on the side of a lightly-trafficked paved road which, for a very short stretch, serves as the Agua Dulce’s main strip. This was not to return to the trail. That was the trail. It goes straight through Agua Dulce.

I have not read an extensive history of how the PCT was pieced together but I imagine it was quite a task. The last time I flew across the country I looked down periodically and was struck by how nearly every flat spit of this huge country shows signs of human use. Over what was probably Montana or Wyoming little dirt roads would split valleys and branch and end at the base of low barren mountains. Considering this, that even the most vast and desolate places in the contiguous United States are marked and divvied up for human use (and over 60% privately owned, even including AK) I almost can’t believe that a continuous path between Mexico and Canada that barely uses roads can exist.

With that in mind I am not in the least bit bothered by road walking. In fact, the civilization stretches get me a little excited. They remind me that I am not just on a long wilderness vacation, I’m walking across the country! I’m sure though after days of road walking my enthusiasm would wear off. Pavement takes a toll on the feet. I traveled for a few days with a man who hiked the PCT in 1977, long before it was officially completed. back then, most of Southern California was road walking. He would marvel at each stretch of trail and point towards the dirt road or highway that he had used 40 years ago.

Anyway, that’s all to say that I’m incredibly grateful to the PCTA for the remarkable 18 inch dirt highway they’ve created. Which we rejoined when it materialized on the side of a road 2 miles past the center of Agua Dulce. One mile later we were out of sight from the houses and farmed fields and could no longer hear tractors.

We would have planned to walk a full day- and at this point a full day is 18 to 20 miles- if it weren’t for the placement of Casa de Luna, a renowned trail angel house, 24 miles ahead. If we did the whole thing, we’d get in late and tired without time to enjoy the magic. So we did about 15 miles, just enough for Weez to reach her 100th mile and camped at mile 469. The next day, 8 miles and we were enjoying ice cream and Gatorade at the gas station by Casa de Luna at 10:30, with the rest of the day to relax.

After Casa de Luna, I began to see why this section had a reputation. The next 50 miles were very hot, mostly without shade, buggy where there was shade, and dry. What got me, though, was that it yielded nothing new. Traversing and climbing and descending similar small mountains, looking out at the same view of the Mohave, the same dirt and brush and burnt trees all around… Until now at least a new plant showed every 10 or 20 miles. It’s ok though because we were approaching one of the most novel sections of the trail yet.

Around mile 515 the trail descends the Angeles mountains for the last time before it clips the corner of the Mohave for about 20 miles and enters the Tehachapi range. For most of those 20 miles, it follows the Los Angeles Aqueduct. This ironically waterless 17 mile stretch is so infamously hot and shadeless that most people do it at night.

We arrived at the last water source before the aqueduct the evening of the 4th day. Since the forecast for the next day was cloudy and unusually cool, we decided to start early the next morning rather than night hike. I knew that it would probably get hot and boring eventually but I was excited. I had experienced very little flat trail and definitely no aqueduct. I knew this would be the kind of section that would give me that excited I’m-walking-across-the-country feeling.

Oh and it did. Rather than me using words, you can look at the pictures and gather what the aqueduct looked like. Most of the time, a road half paved, half dirt. And I might have gotten bored except that we started walking with another pair early on and spent most of the time making friends.

When we got to the water source 17 miles into the day, a faucet courtesy of the Los Angeles Department of Water and Power, we had plenty of water left. And with the clouds and the wind, we were even kind of chilly. And very tired and hungry. We found a spot out of the wind to put our groundsheet, ate some delicious hummus cheddar tuna wraps, put on our puffy coats, laid down very full and cozy, and a half hour later opened our bleary eyes realizing we had fallen asleep. And then… we felt rain drops. Unbelieving we looked up at the overcast sky. But we’re in the Mohave, I thought. Nonetheless, the rain came down and for the first time we used our umbrellas for rain rather than sun.

After a few hours we rallied enough to go 6 more miles to the next campsite. I haven’t mentioned yet that we had already entered a wind farm. Well, we continued through this wind farm. And it was very appropriately very windy. Hold-onto-your-hat wind. Hard-to-walk straight wind. Tear-the-contact-out-of-your-eye wind. Yep, my contact flew out of my eye. But It was ok because we were walking through a wind farm. Dozens of massive, magestic, alien structures towered around us, blades tirelessly swooping down. It sounded like wind whistling around buildings and many planes flying above.

That was only the first wind farm we encountered. The next day we came across an even larger one after topping the mountains. By the time we reached highway 58 14 miles later I felt I had my fill of walking through wind farms.

I’m very pleased to be in Tehachapi now hosted by an incredibly generous trail angel. I picked up my first set of resupply boxes sent by Cameron (thank you!) which contain 7 days of food for our next 136 mile stretch and another pair of trail runners! Which I sorely need, mine have so many holes they are nearly better sandals than shoes.

Louise here! This past week we have encountered some really generous trail angels. Casa de Luna is run by the Andersons, renowned for Hawaiian shirts, taco salad, pancakes, bandanas, and painted decorative rocks. As soon as we arrived, we went through an informal orientation, picking out our favorite Hawaiian outfits from a large rack of bright clothes and following our guide around the winding property to find a campsite nestled in the backyard jungle. We soon found the painting table, decked out with every color of acrylic paint you could imagine and brushes of every size sticking up out of cloudy cups of water. Each of us painted two rocks (these “rocks” are broken up slabs of cement) and got to place them anywhere on the property. Morgan made puzzle and pancake-themed rocks, and I made a moustachioed man as well as a colorful, more abstract-type rock.

That night we had to dance for our bright red PCT bandanas, which were complete with hitching directions “Town to Trail,” “Trail to Town,” a map of the PCT, and listed mile-markers for each stretch along the trail. So if someone didn’t already know that they were headed towards Canada, they could figure it out from these handy bandanas! 😉

The first leg of the hike leaving Casa de Luna the next morning was hot and steep, but I was determined to test out my limits and try a 20-mile day. We were successful, and slept that night at a campground 20 miles out with trail magic! A hiker who is currently off-trail healing from a knee injury was visiting her partner on-trail and brought oranges, chips, salsa, water, and beer for all of us. So we didn’t have to hike up a hill to refill our water, and we ate fresh oranges as the sun sank down over the horizon.

The next two days we hiked 20 and 23 miles, amping up my hiking speed and keeping up with our new friends, but also causing some pain in both my arches and Achilles. As a result I take stretch breaks quite often, and I’m hoping that the problems will fade in the coming days and weeks. Luckily two of our new friends are doctors, so we can ask them questions about useful stretches and get their opinions if either of us begin experiencing new pains of any sort.

Right before getting off the trail, we camped under some trees at Willow Springs Rd and were lucky enough to receive trail magic from a man named Legend. Morgan had met him before, 400 miles ago, and knew the drill. Legend lives in his RV and trail angels all-day-everyday. He is known for his spaghetti dinners and can you guess it . . . Pancake breakfasts! He will stay in a certain location for about 2 weeks, feeding and getting to know each hiker that passes through, then he moves on to another location further up the trail. We might be seeing Legend again in Kennedy Meadows or further on down the line. So we really have been dining in style, thanks to Morgan’s well-thought-out resupply boxes, and the generous trail angel community.

Lastly, the trail angel we cannot forget is Fran, who picked us up at Hwy 58 and has welcomed Morgan and I into her home for the past two days. She knows everything there is to know about Tehachapi, and brought us to the Cesar Chavez museum and monument, along with the famed Tehachapi Railway Loop. She took us to the post office not one but two (!) times, and has crushed us in Jeopardy both nights. Morgan, my feet, and I are very grateful for the rest, and are excited to head back to the trail, packs stuffed with food (including our mama’s amazing ginger snaps!), at 6:30 in the morning. 6:30 is not too far away now, so we must be heading to bed. We’ll catch you in Kennedy Meadows next week if all goes according to plan! 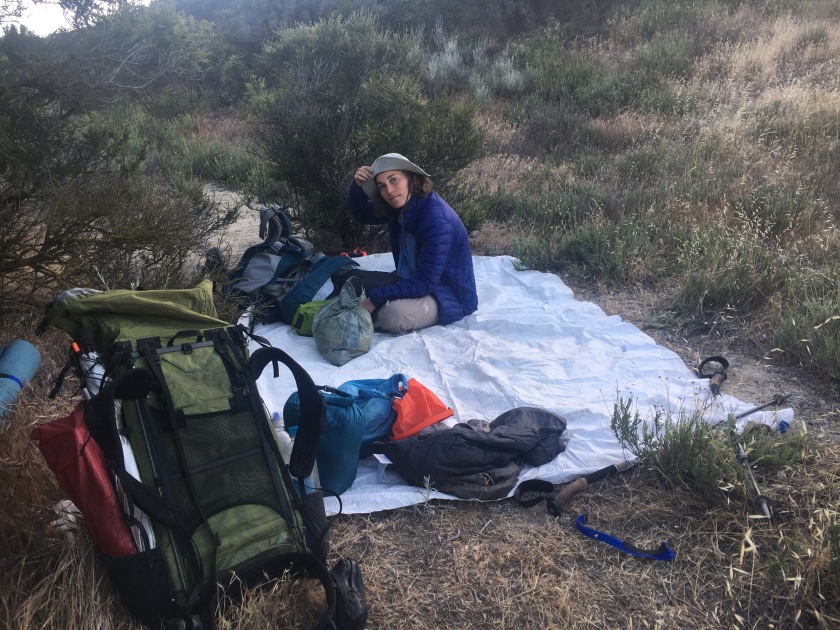 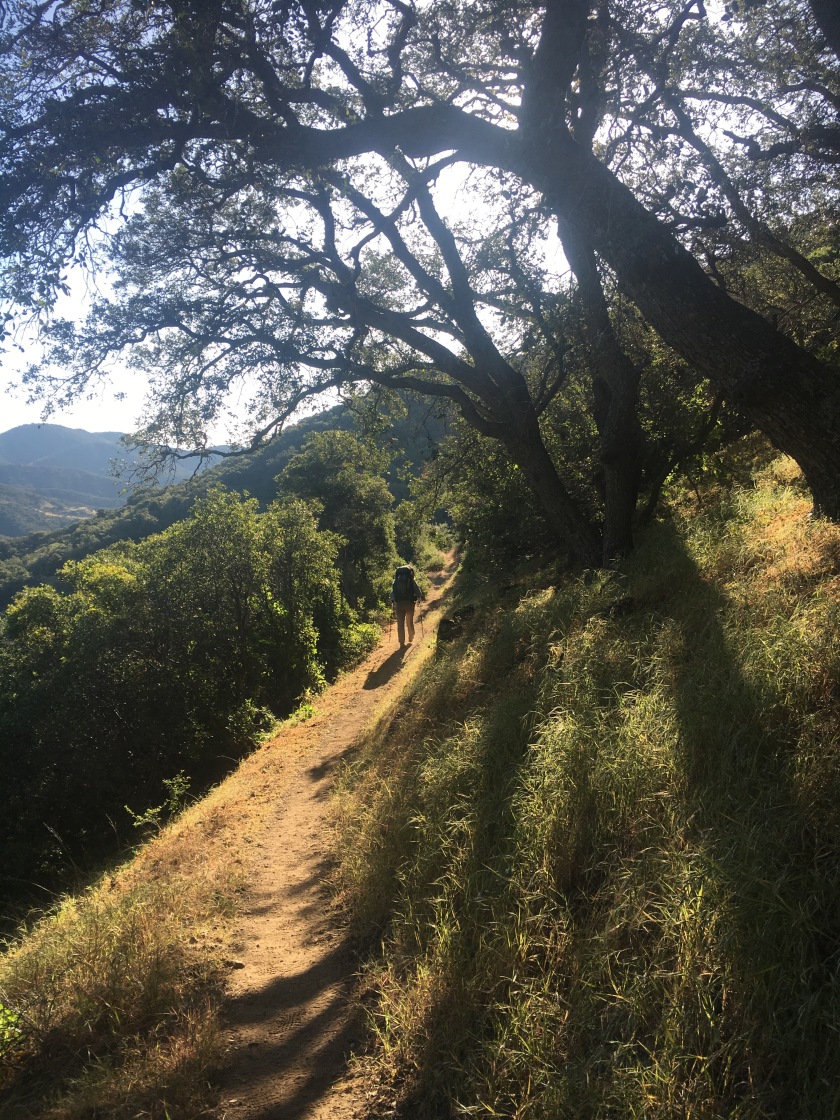 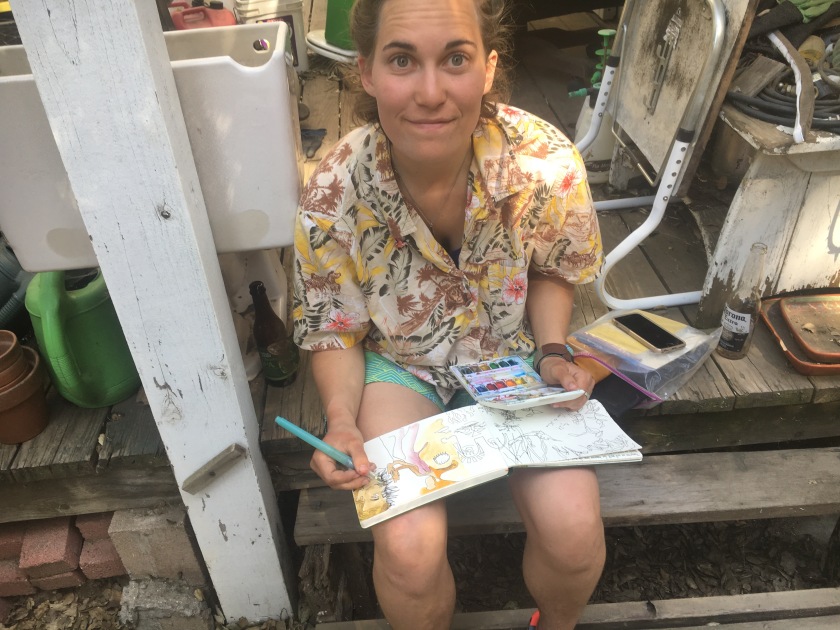 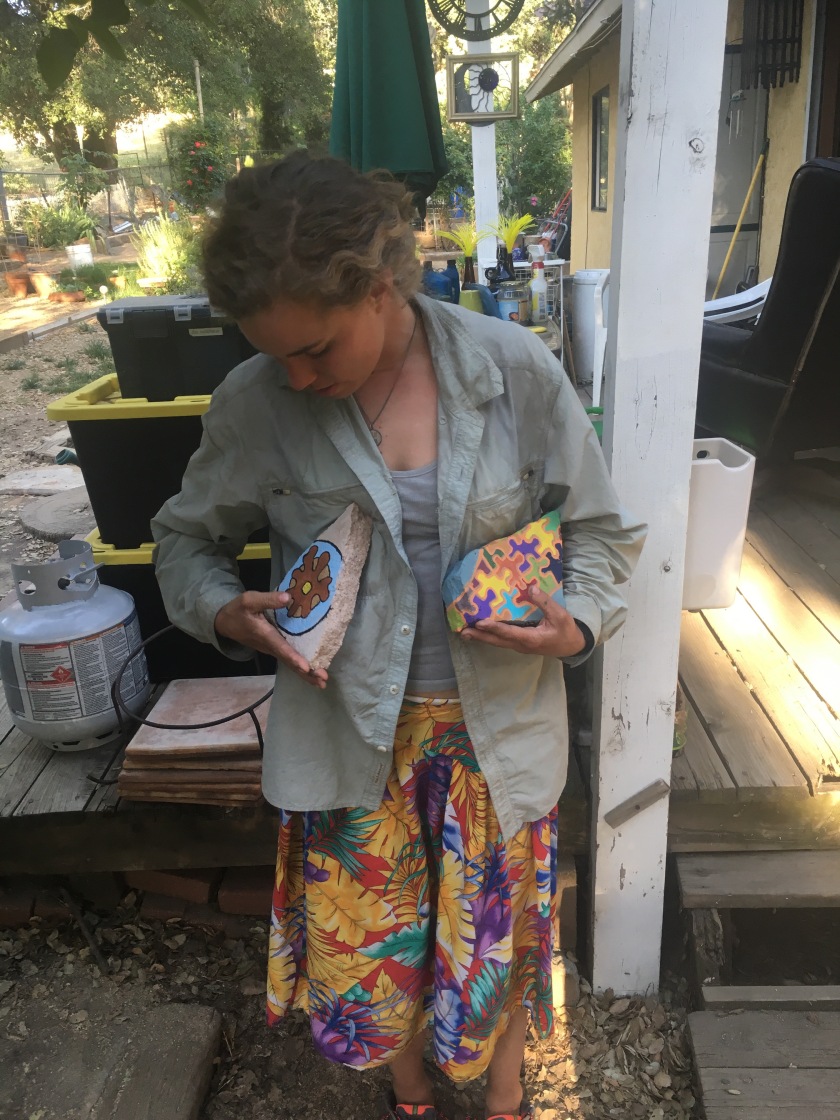 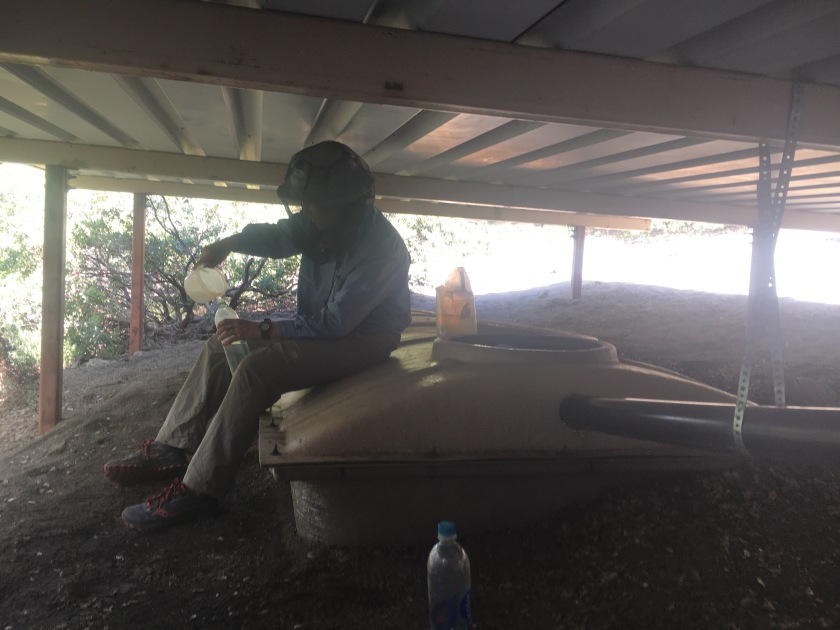 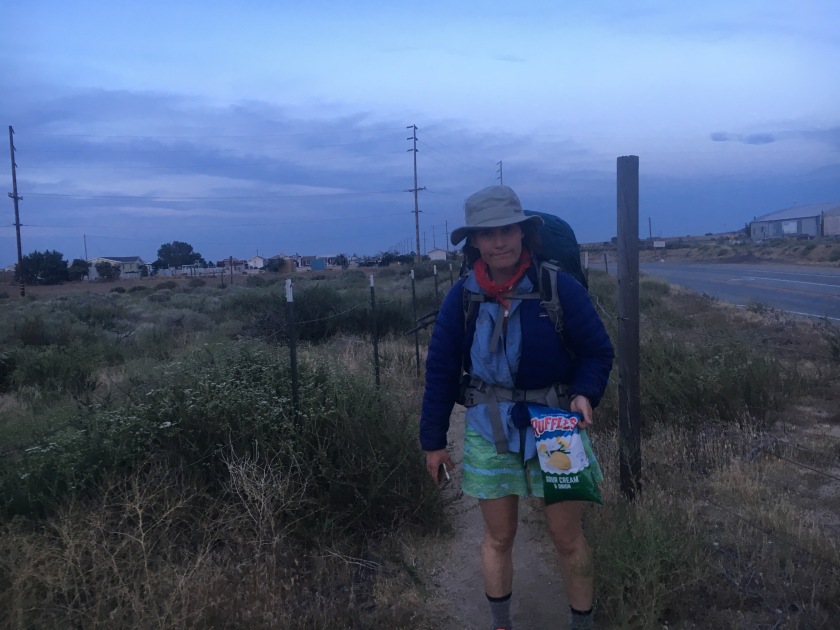 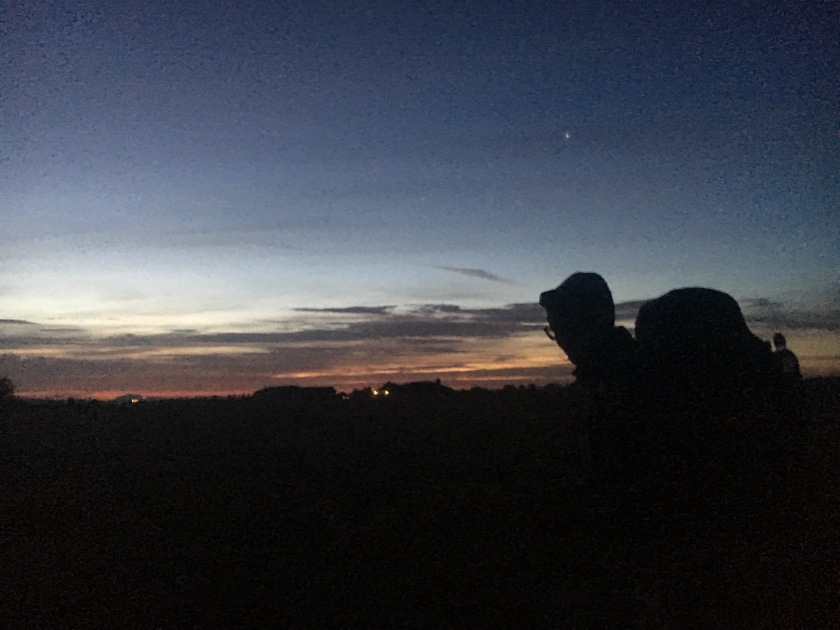 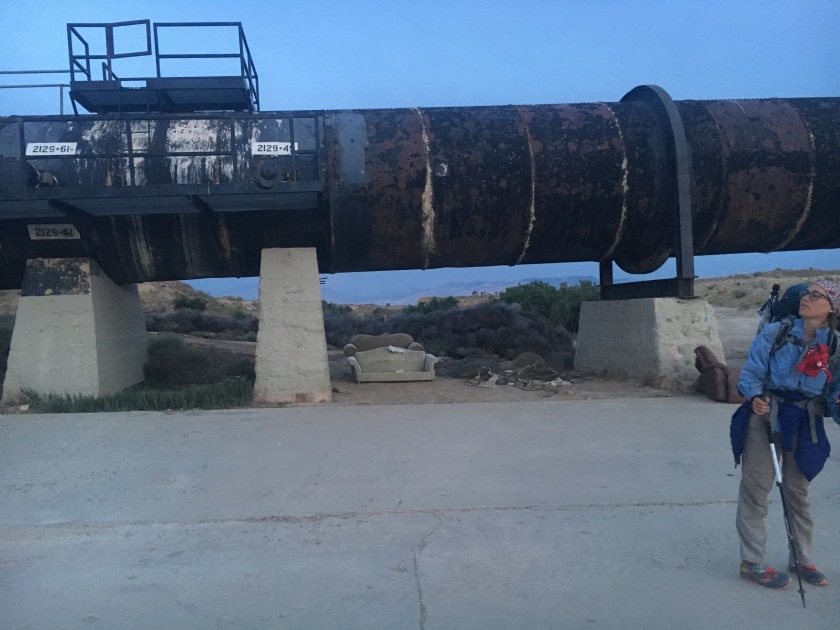 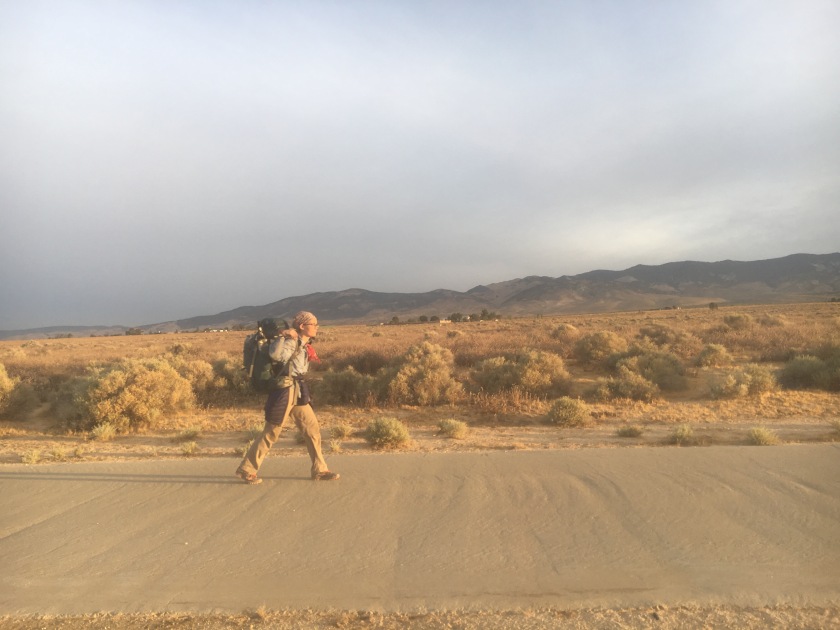 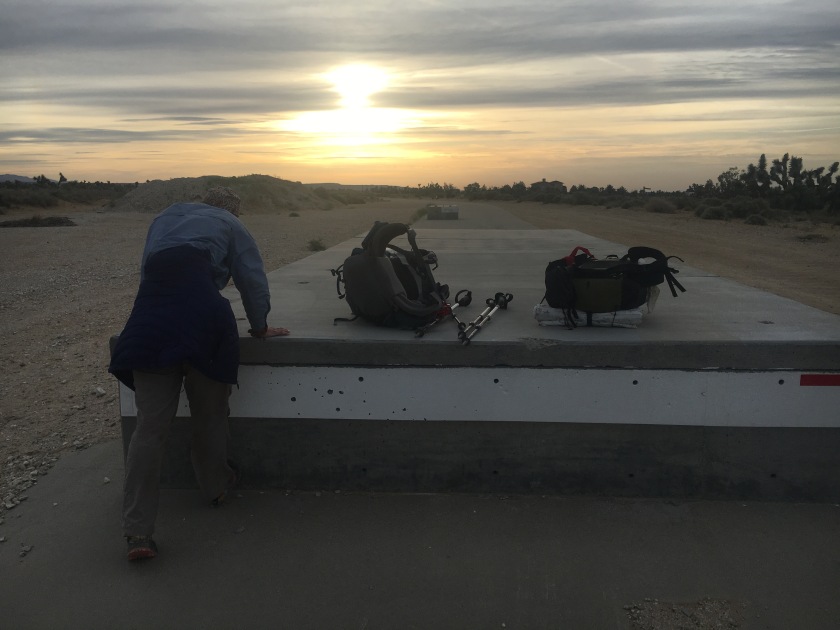 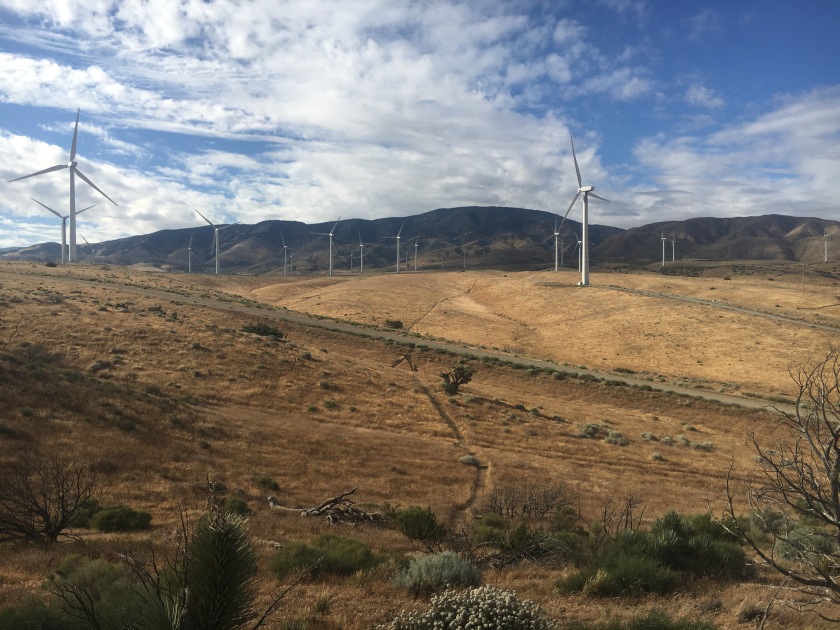 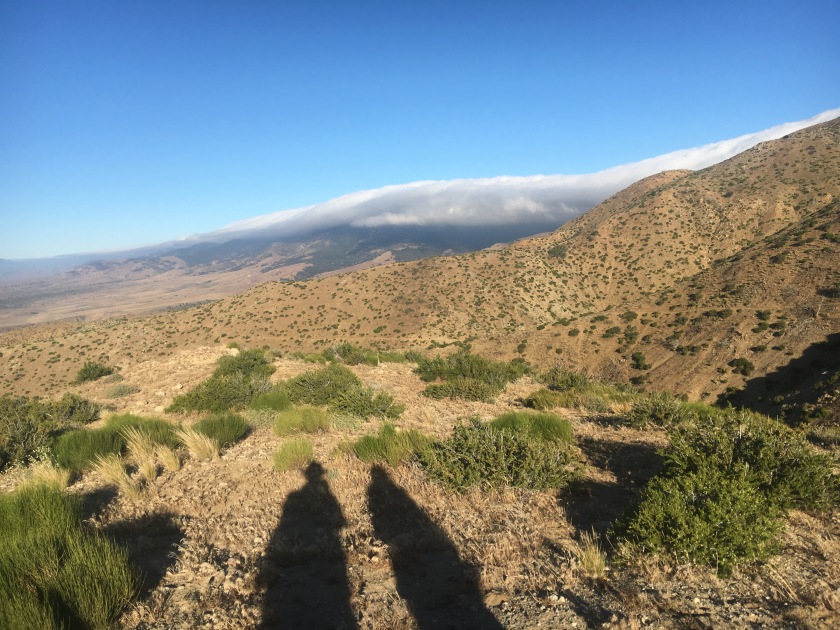 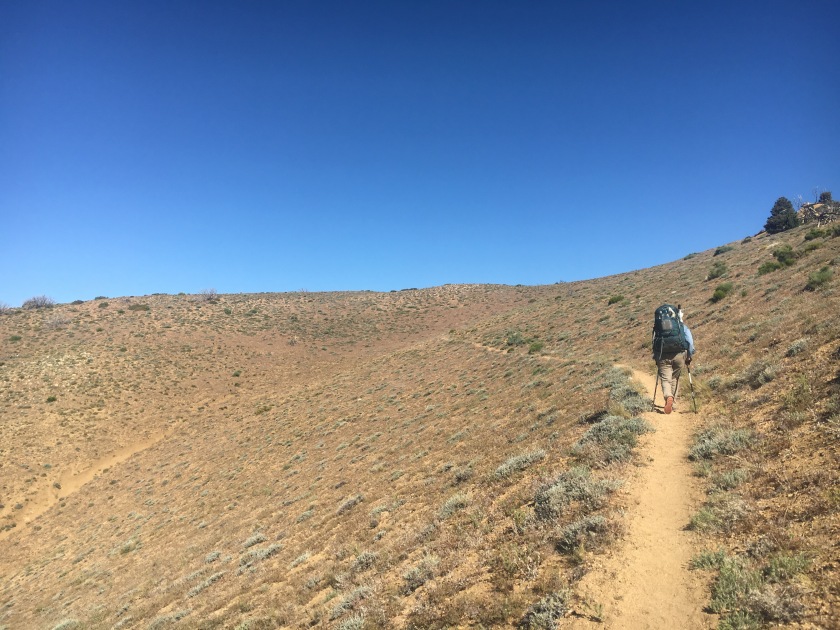 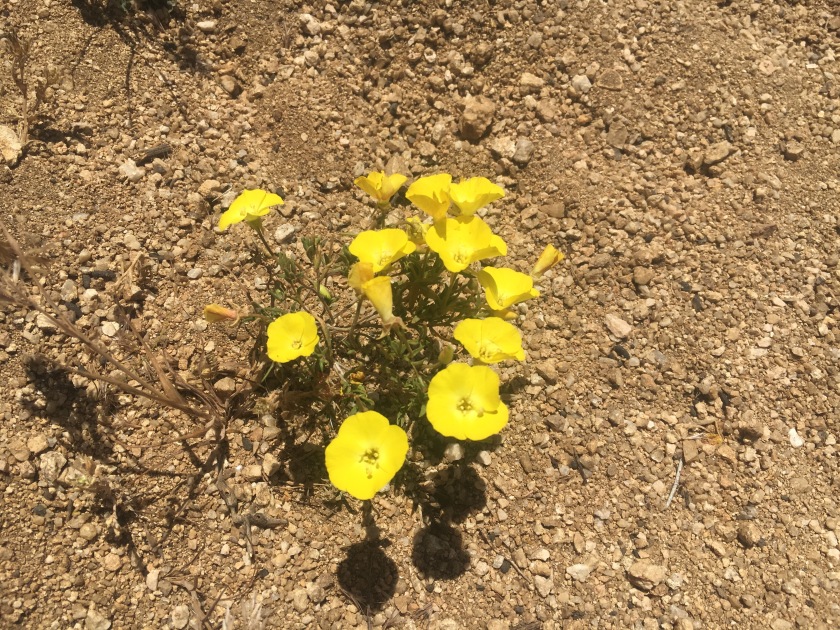 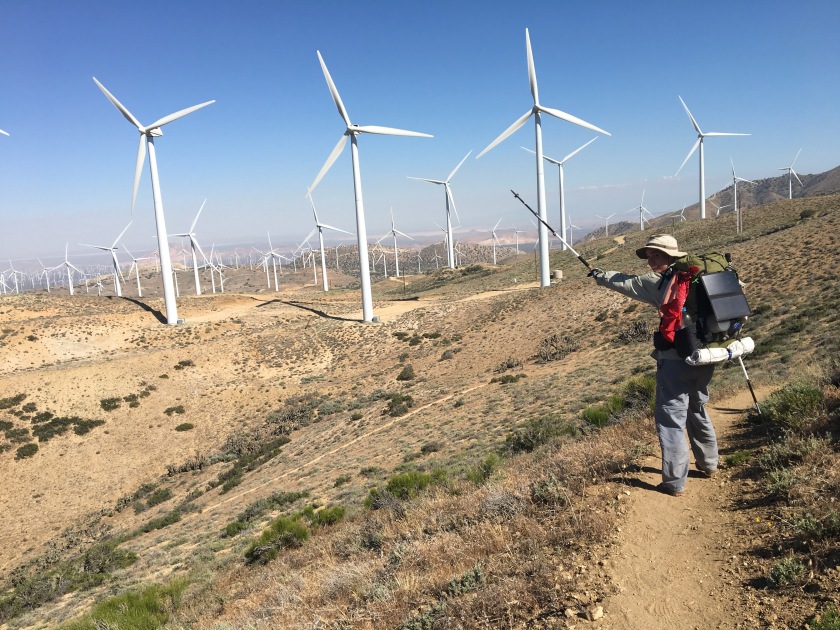 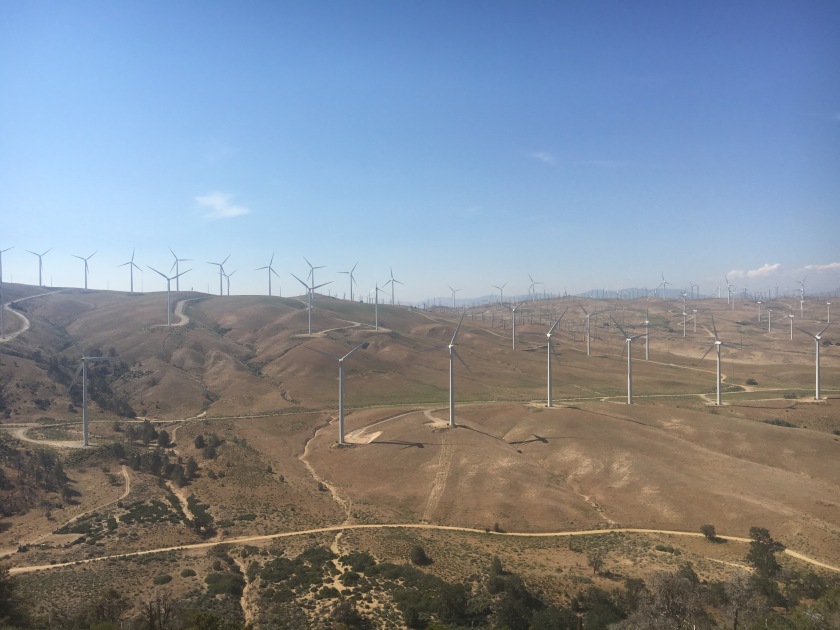 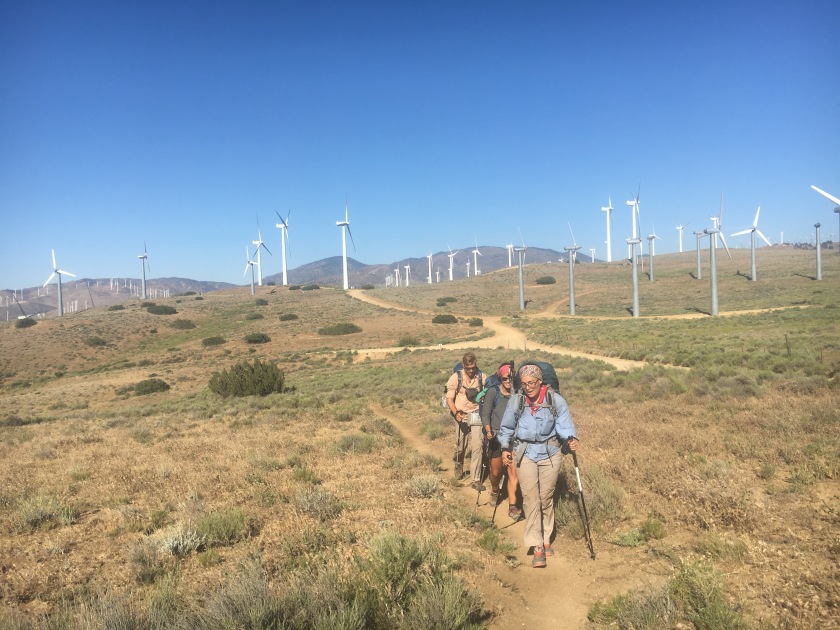 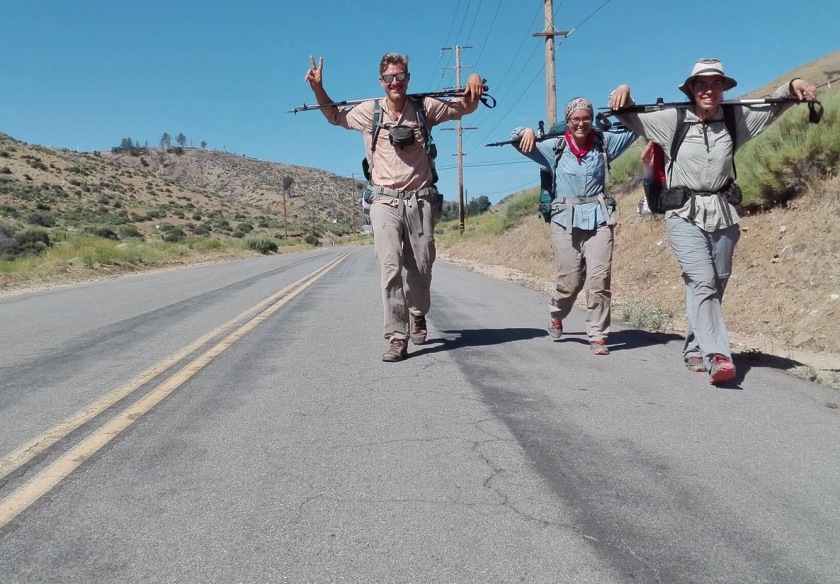 One thought on “Stretch 6, Agua Dulce to Tehachapi”