After seven days of enjoying our family and sitting on a couch for long stretches, it was time to get back on the trail, which continues out of the South Lake Tahoe Area at Echo Lake, around mile 1092. Echo Lake is beautiful, the shores dotted with really cool rustic cabins only accessible by trail or boat. We learned that these cabins are mostly owned by the Forest Service, with long term leases to families. And Louise has a friend whose family has a cabin.

So we were incredibly fortunate to say goodbye to our family and spend a night on Echo Lake, and the PCT, hanging out with Louise’s friend Henry, his brother Zach, and their friend Mads. This was super cool. Every PCT hiker walks by those cabins and I bet very very few have gotten to hang out in one.

Late last Sunday morning, after hanging with Henry and fam , eating a leisurely breakfast, reading a magazine aloud, and playing with their dog that didn’t like us, we quit dragging our feet and got back on the trail. We were apprehensive about what all this rest would have done to our trail legs, whether we were still capable of walking 8 to 10 hrs a day and making decent mileage.

Our worries were not completely unfounded. Getting our walking groove back happened slowly, not helped by the fact that the trail past Echo Lake was still far from snow-free. But we were easy on ourselves, setting lower-mileage goals at first. This was great for our legs and because this stretch of trail was beautiful!

Right off the bat we went through Desolation wilderness, some of which was still really frozen over but some of which made me think, maybe the high Sierras would have been this pleasant if they weren’t covered in snow… I couldn’t resist hopping in a lake we passed the first afternoon and feeling unrestrained by the necessary order of conquering terrain in the high Sierras, we decided to camp on top of a pass, because we could. This was a great notion, and I’m still not sure I wouldn’t do it again, but it turned out to be a very poor camping spot. We found a spot to sleep that was slightly sheltered from wind, but the noise kept us up nearly all night.

We experienced our share of good camp sites though. The day after we camped on the pass we aimed to do 17 miles. Shortly before we hit our mark we came across a cooler with ‘PCT HIKERS’ written on it. Trail magic! Inside were the last few of a couple six packs of beer- but not just beer, nice beer. We grabbed a couple and were inspired to make a campfire a few miles later when we stopped for the night. So we enjoyed snow-chilled craft beers by the fire on a chilly night. Thank you Tahoe-area trail angel!

The next couple days we experienced some of the prettiest trail yet. There were two five mile stretches on top of a ridge, paralleling Lake Tahoe and covered with wildflowers, gorgeous views on both sides. The third night we were hiking later to position ourselves well to get into Truckee midday the next day. We passed a marked campsite after 17 miles and were continuing to one 3 miles later when we came across a perfect spot, overlooking a large valley to the west, dusted in evening sunlight. Maybe one of our favorite spots yet.

The next day, the fourth day, we went into Truckee with the main purpose of buying a knee brace. We weren’t originally planning on stopping there at all. The town and its people made such an impresssion, though, that we decided to stay the night. Starting with Mike and Melissa, who gave us a ride from the trail, we experienced such kindness. Bonnie and Joe, who we met in the produce section of Safeway, gave us a ride to the hostel and invited us to hang out with them at an outdoor concert. Here they brought a cool muscle shocking wireless device to help my knees. We had a great time with them. And Joe gave us a ride back to the trailhead. Truckee was a great stop.

The next couple days were scenic like the rest but all that stands out in my mind was one day of snow and lots and lots of muck. I had grown accustomed to the snow but vast ankle-deep mud was new and I did not like.

But Sierra City is lovely, a tiny mountain town nestled in a narrow valley where hikers hang out at the general store and camp behind the Methodist church, likely doubling the number of people in the Main Street area. We have enjoyed a milkshake and sandwich, free cold showers in the public restroom, and cookie bars sent from Mom, and will soon head back to the trail.

Limited photos because of wifi difficulties 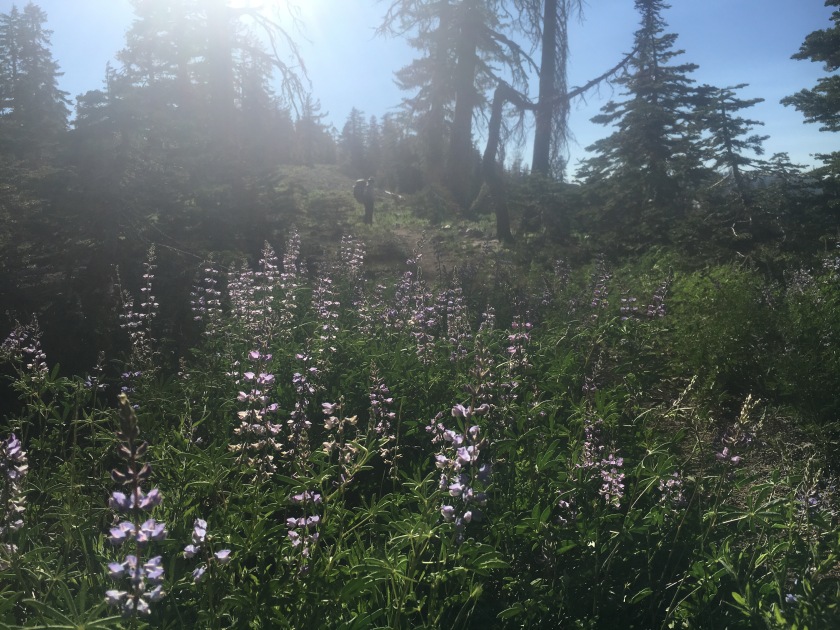 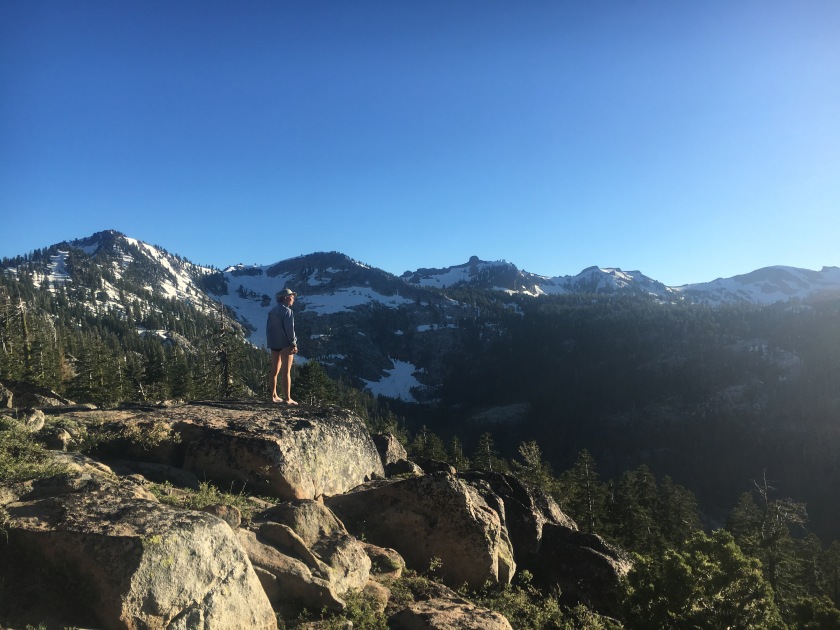