Before Louise and I even arrived at Fish Lake we had scrapped the plan to make it to Sisters by the eclipse. That decision became moot as we learned that the trail was closed starting at Elk Lake, 50 miles before Sisters, due to fires in the Three Sisters Wilderness. We still had a lot of options to consider. Getting to Elk Lake before the eclipse would require nearly a week of consistent 30 mile days. Something I know we are capable of but it would not be fun- certainly not how we wanted to spend our last days on the trail together. And even if we made it to Elk Lake, we still wouldn’t be in the range of the total eclipse. And we didn’t want to brave the roads (even by hitching) the day of or night before the eclipse.

We decided not to make it anywhere special for the eclipse- we’d see it from somewhere on the trail, still very close to totality range, without any hubbub. And then we would make it to Elk Lake and from there to Bend where we’d eventually split.

Super. Once we had this long-term plan figured, we could focus on the trail (and closures) directly ahead of us.

Morgan and I left Fish Lake, 2 useless left shoes strapped shamefully atop her pack. We planned to take our time during my last week.. make it to Crater Lake and and eventually Elk Lake in no rush.

We were 30 miles from the last exit point before the Blanket Creek fire closure. How most people were getting around it: taking the Sevenmile trail for 2 miles, walking on a forest service road for about 5.5, then 4.5 miles on a very sparsely trafficked road running straight between cow-dotted fields to Ft. Klamath… all that before even getting to the highway 62. The day of the detour we had 8 miles of PCT to do before the junction. We made great time, cruised past the Sevenmile junction and down the forest service road. As we walked between the vast ranches, able to see miles ahead down the straight paved road, Morgan put on Fleetwood Mac’s album Rumors, and it felt like a soundtrack of some film about an adventure starring us.

When we finally hit Ft. Klamath and consequently the highway, Morgan and I decided to grab snacks at Jo’s Motel. Her organic cafe had a surprisingly varied selection of fancy foods and drinks from around the country. We got little cups of ice cream and some fruit. Morgan loves mango and I love watermelon, so we each emerged holding our favorite fruits and plopped down on the picnic tables outside the motel.

Some hikers with a purist philosophy about the trail were intent to walk the whole detour, including the 14 miles on highway 62. We were not so stringent. We stood outside the motel with thumbs out for maybe 30 minutes while cars drove by.

We decided to start walking. A few more minutes of cars flying by and I was losing hope of getting a hitch. I mentally prepared myself for some road walking, suncreening my nose and ears, and of course this is when a car pulled over.

We’re headed to the National Park, I told the driver. Hop in, he said. We met Greg, a ranger at the park on his day off. We really hit the jackpot here. Ranger Greg turned out to be not just a clutch hitch but also a gracious host for us in the park.

He took us to a great viewpoint on the way in, then to the general store for a small resupply, and then was gracious enough to let us shower, do laundry, cook dinner, use wifi, and sleep in his apartment! On top of all that we were fortunate enough to have arrived on the last night of the Olympic Games put on by he and some friends who work at the park. We got to meet and hang out with more park employees and even participate in that night’s event- the beer mile.

The next day Greg was nice enough to take us to the post office so I could send home my left shoes and then to the start of the Crater Rim Trail, a much more scenic alternate to the PCT for about 10 miles. Normally most PCT hikers would be using the Rim alternate anyway, but this year everyone was as this section of the official PCT was closed from the Spruce Lake Fire.

The Rim Trail was open but the fire was still near enough that smoke blanketed the area. Despite that, the view across the lake was breathtaking. We couldn’t actually see the other end of the lake but it looked mysterious that way. Perhaps because of the smoke, few people hiked the Rim Trail, after a mile past the Rim Village we only saw other PCT hikers. We took our time and made camp early, shortly after the trail stopped hugging the rim.

The next day we realized that the eclipse was happening in the morning of the 21st and we would only reach Shelter Cove Resort, where our mom had sent a care package with goodies and eclipse glasses, if we started really movin’. So we did 31 and 28 miles the next days to give us the whole morning before the eclipse to do the remaining ~10 miles to Shelter Cove. We made it in time and got to eat cookie bars made by mom and watch the eclipse through our glasses with a bunch of other hikers.

We hung out at Shelter Cove most of the day, as long as we could and still make it the 9 more miles to the Maiden Peak Shelter, an awesome hut that functions as a ski lodge in the winter and is open for anyone to use in the summer.

We got there a bit late but with some light remaining. Someone was leaving the hut headed towards the woods. We only saw the back of him, but we thought we recognized Rhino, who we hadn’t seen since VVR, before Mammoth (over a month earlier!). As we neared the hut we heard a voice with what sounded like Ladybug’s distinct Swiss accent. Yes! Ladybug, Arvid, Lydia, and Rhino traveled together in the high Sierras, at nearly the same pace as us for a couple weeks. Arvid and Lydia are brother and sister from Germany, maybe our favorite sibling pair.

We entered the cabin and sure enough, there they were. It was so fun catching up and their brother sister banter is ever-amusing to us. After much talking we decided it was time for bed. We climbed the ladder to the loft and set up our sleeping pad and bags, making two lines of down slug-shaped lumps.

After the solar battery powered lights went out we laid in the dark, finding comfortable positions and maybe a couple of us dozing off when we saw a headlamp light shining through the windows. A minute later the door opened. All we could see was a light shining in our eyes, but we heard a , ‘Hi’ in Atlas’ Hungarian accent. He caught up!

It was late so he shuffled around in the dark and eventually joined our line of down lumps in the loft. I’m the morning we took our time before leaving, learning all about his travels and sharing our own.

Elk Lake was an easy day and a half away. So the day we left the shelter was Louise’s last full day on trail. We made it fun- stopping to pick as many berries as we pleased and ending the day after only 23 miles because there was a pretty spot by a pond.

The hike to Elk Lake went by fast with Louise at the helm- she booked it. We surpassed the standard 10 before 10 benchmark doing 10 miles before 9:40- even though we got a late-ish start. Louise loves those morning miles… 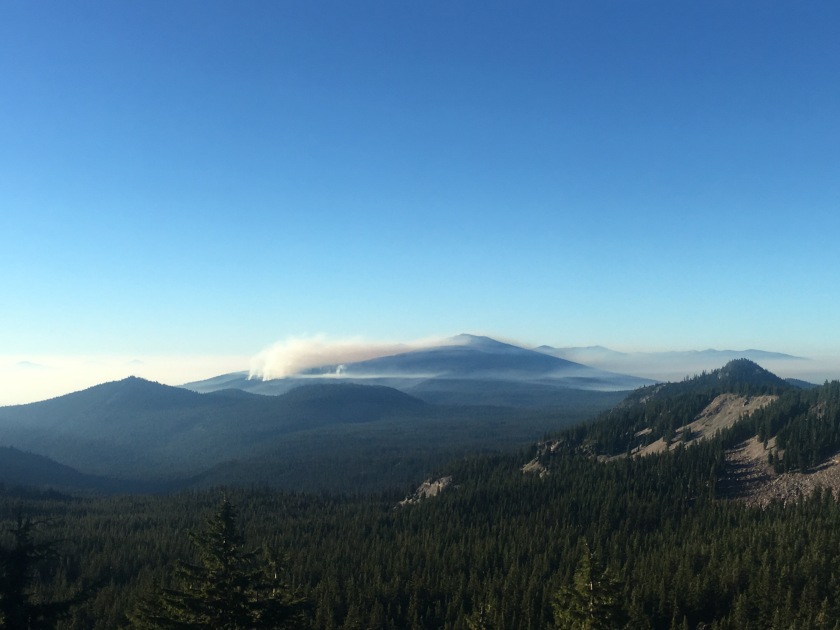 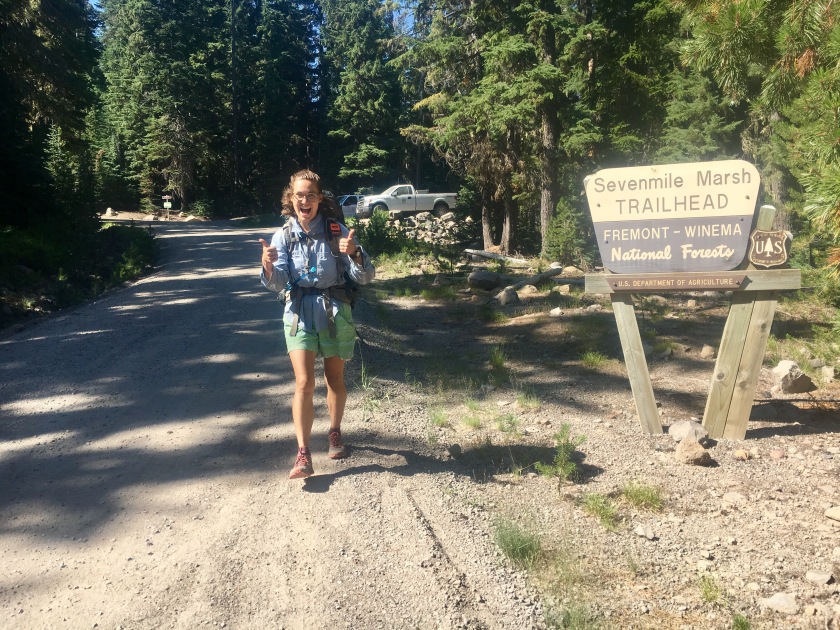 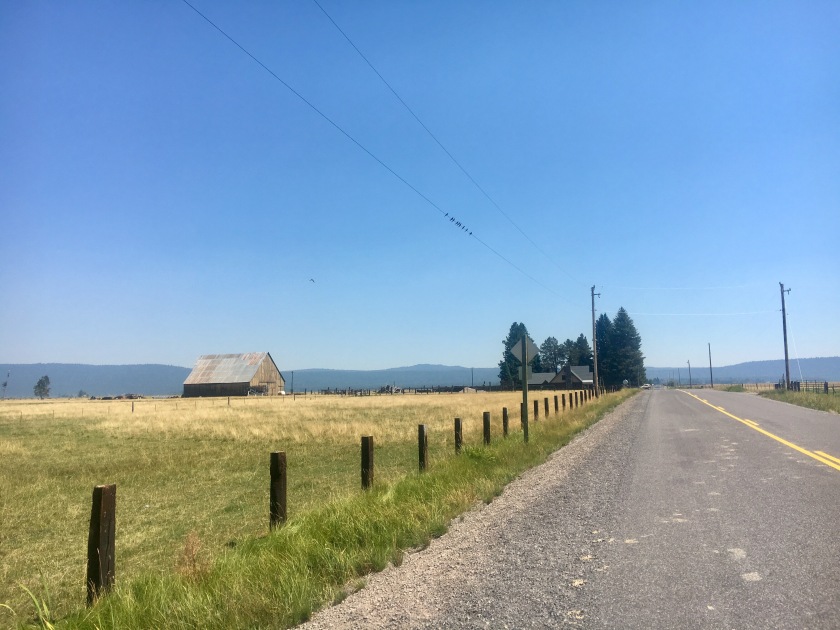 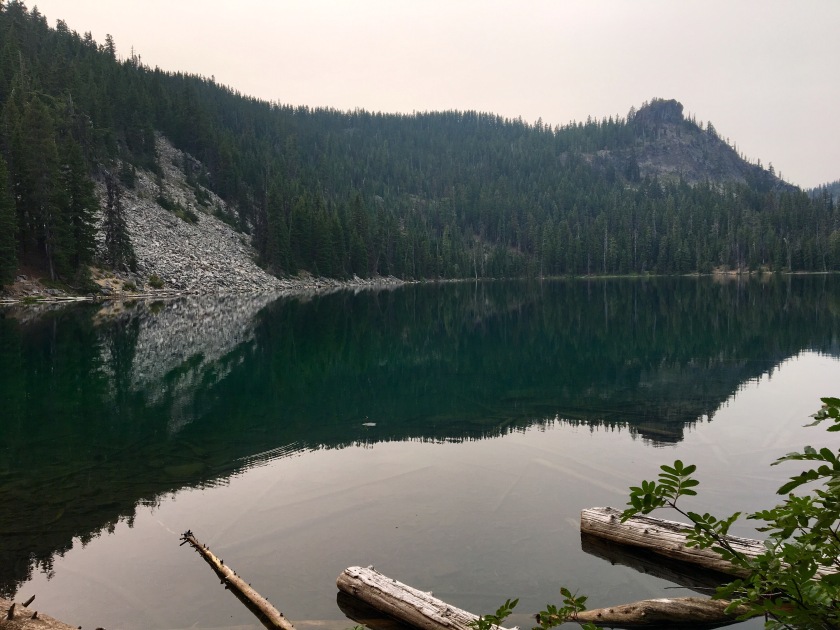 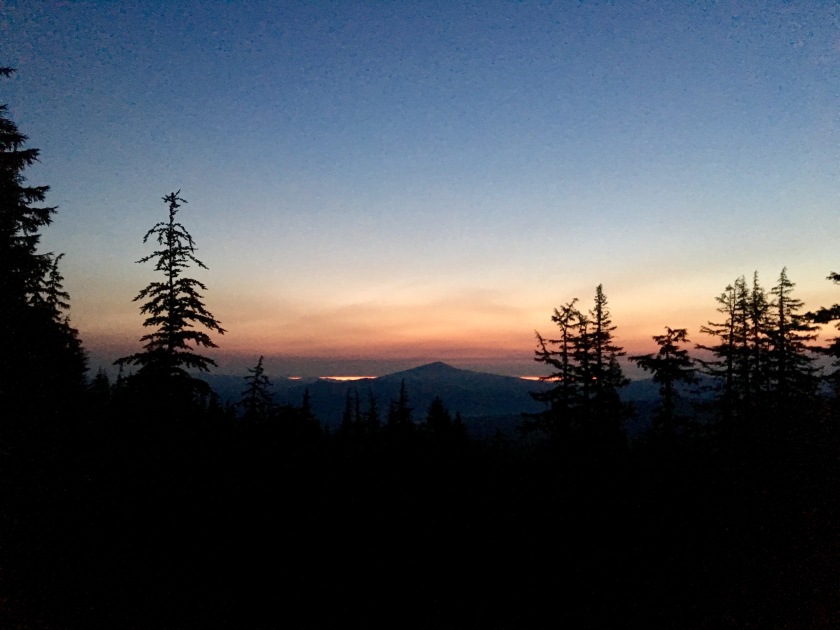 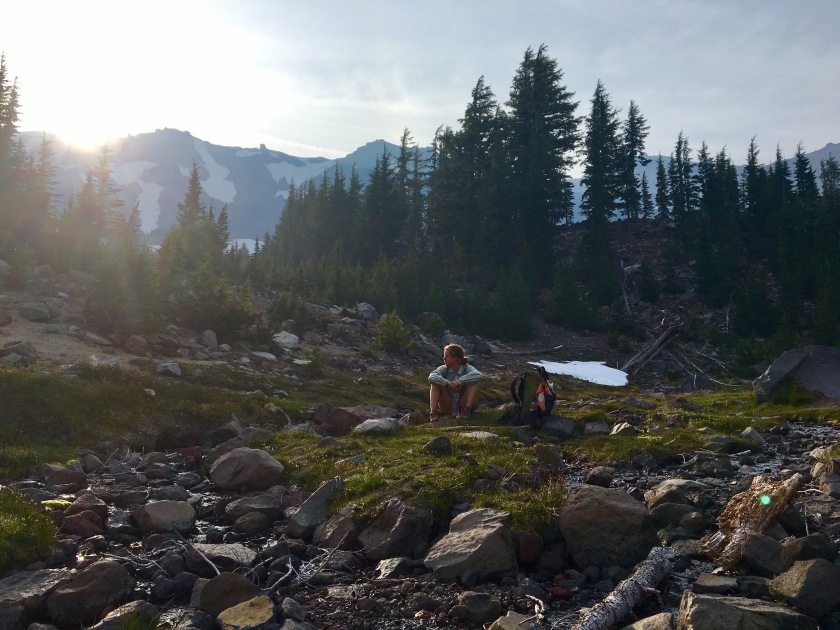 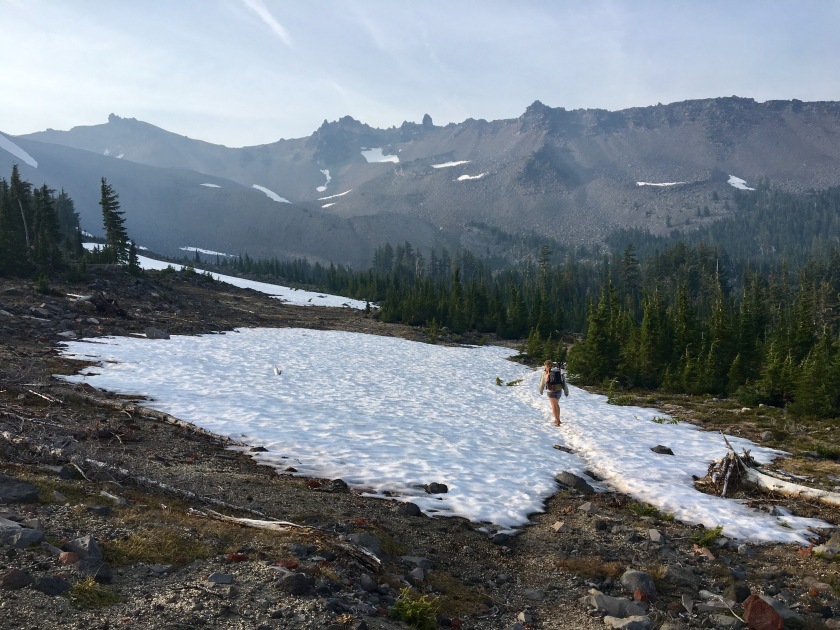 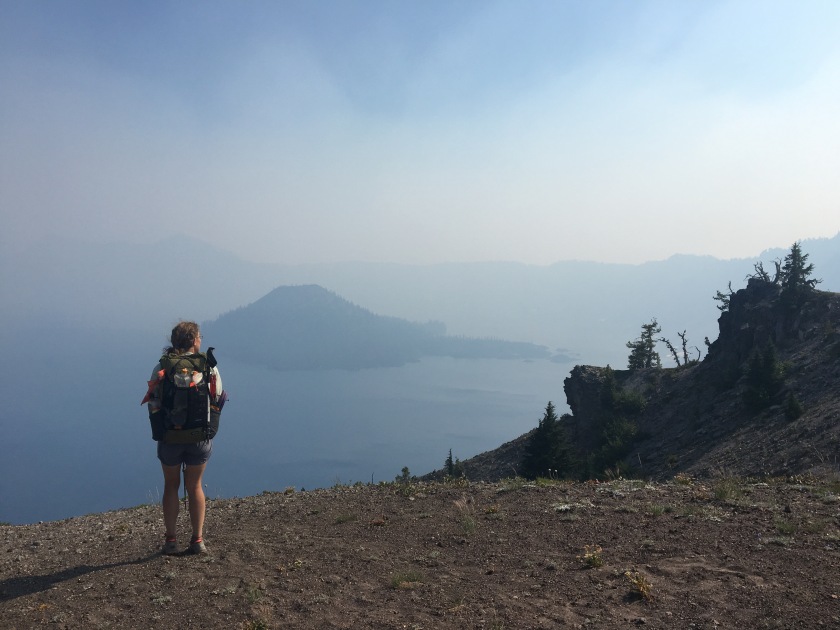 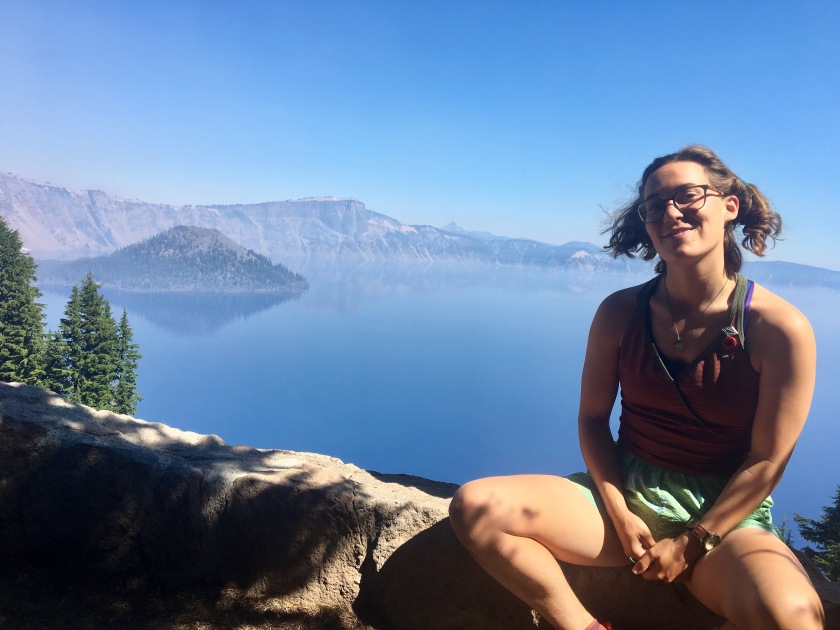 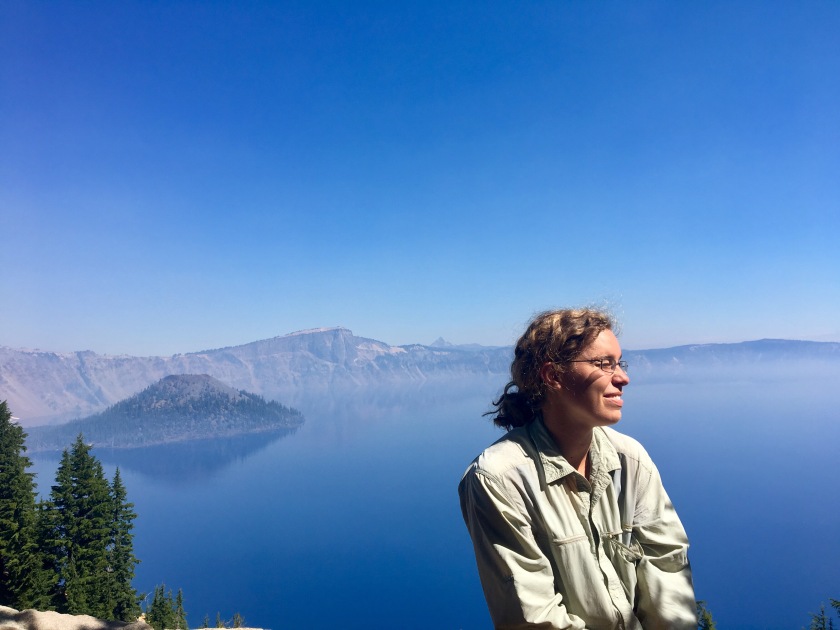 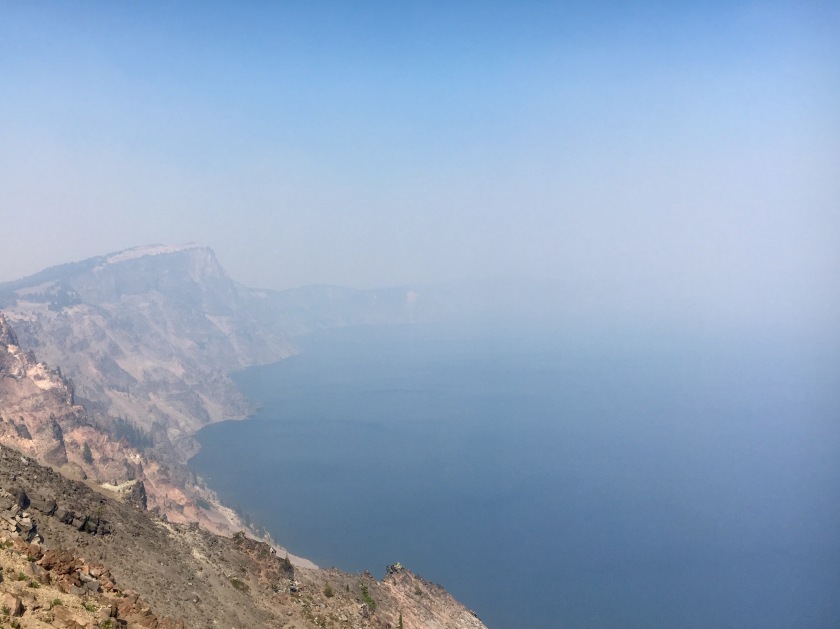 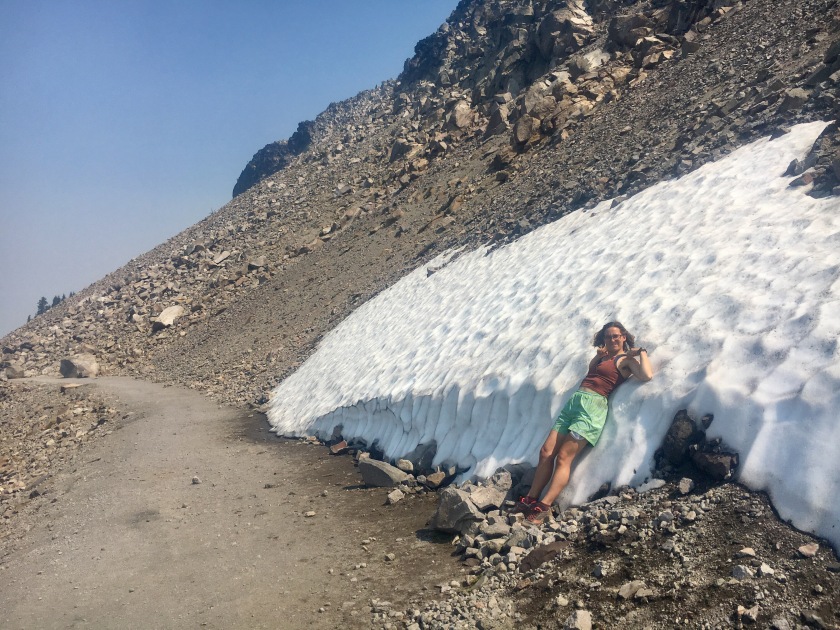 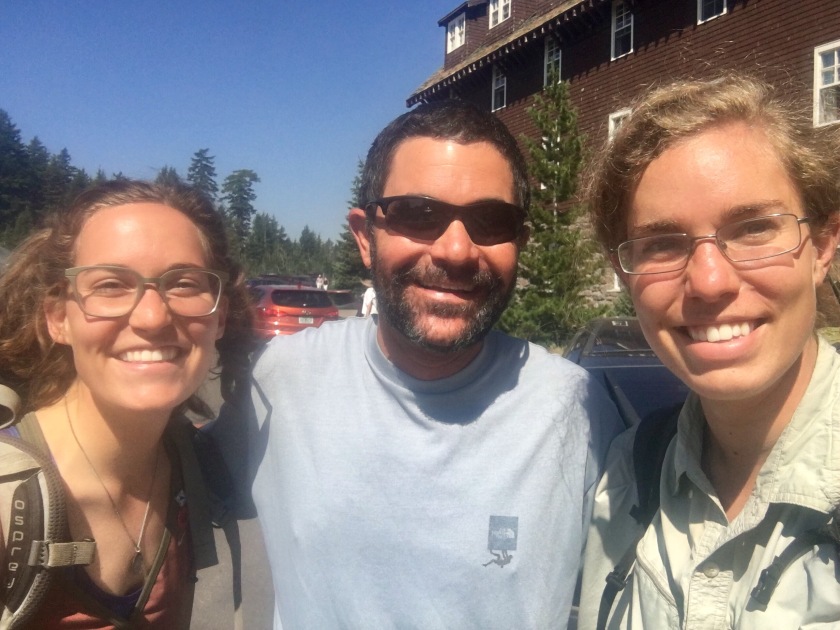 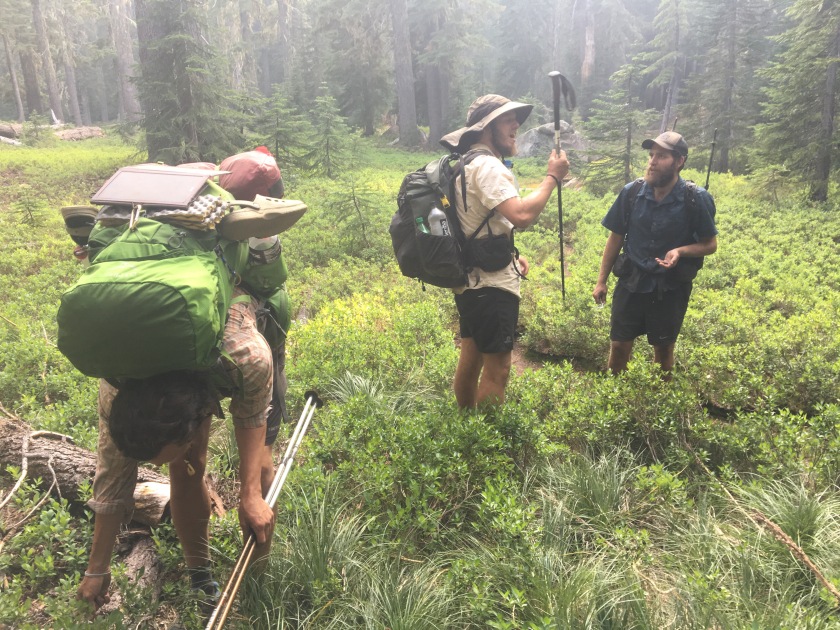 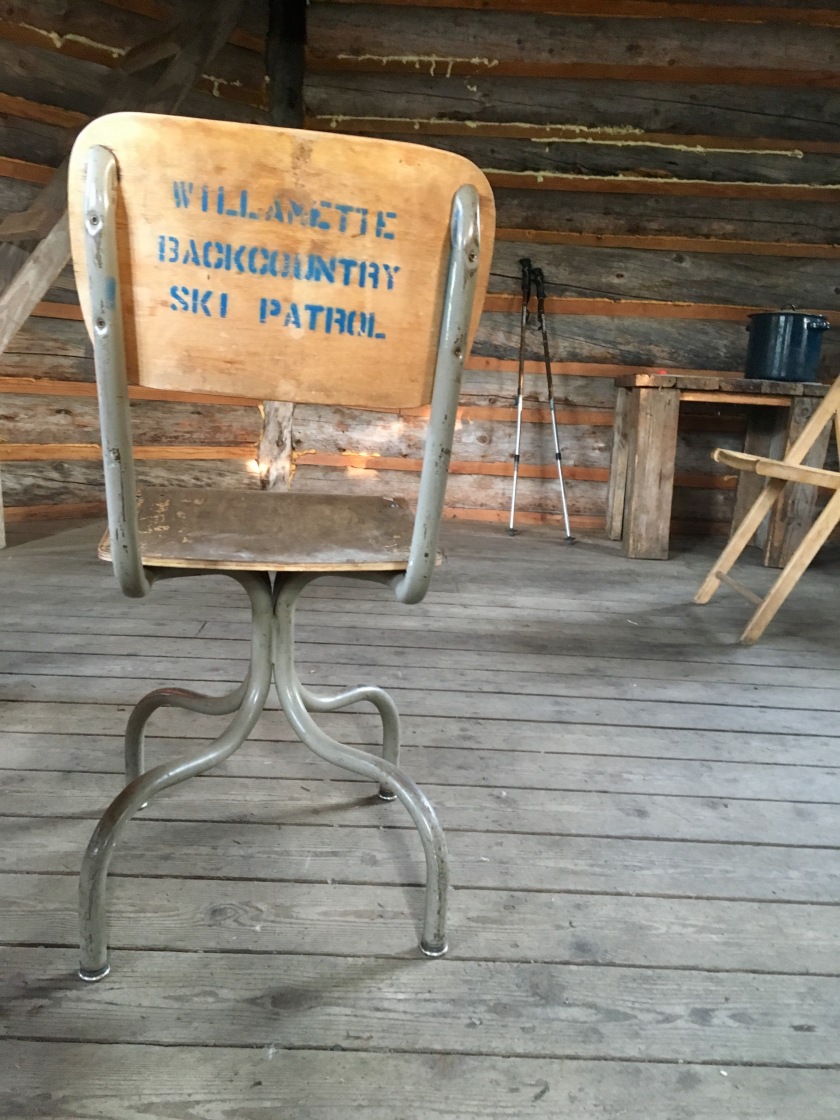 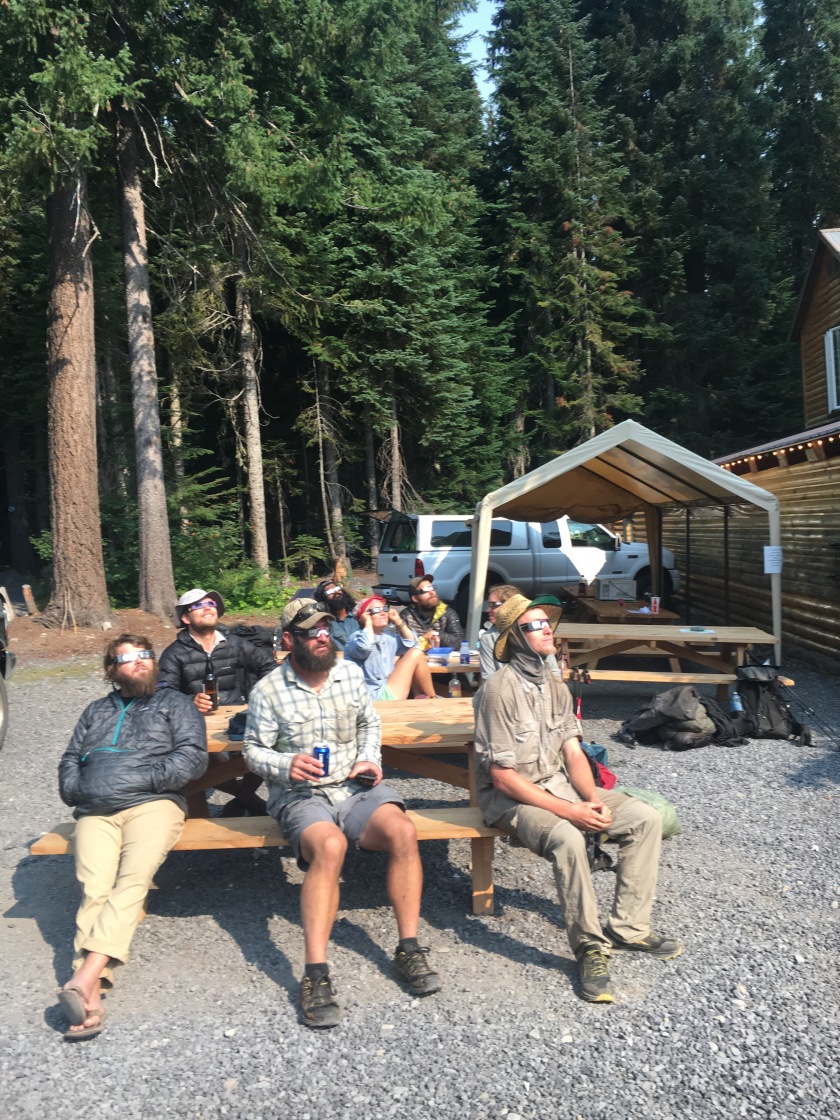