After 3 amazing months of having a buddy to share in every adventure, I knew I would have to adjust to hiking solo again. Most of that would just happen in time, but one part I could tackle right away, in Bend: gear changes. Louise and I shared an almost 4 lb tent, a massive 11 oz Tyvek groundsheet for cowboy camping, a solar charger, and an integrated stove/pot weighing together 1 lb.  That may not sound too bad- and it wasn’t shared between 2 people- but for one person, this is pretty heavy.

So. I got a new stove and pot- less bulky and lighter- weighing 7 oz. I ditched the solar charger because between smoky skies and tree cover, we were never able to use it (though this didn’t really save weight because I added a hefty power bank). A groundsheet and tent is just too luxurious for one person, so I nixed the groundsheet as well. The alternative to my 2 person tent is my tarp which was back in Seattle, so I was stuck with the tent, for then at least. I also took Louise’s steripen for sterilizing water- it is much more convenient than my squeeze filter.

After sorting through my resupply and completing the gear shuffle, it was time to get back on the trail. Because of the size of the fires around Three Sisters Wilderness and Mt Jefferson, almost 90 miles of trail were closed north of Elk Lake, where we exited before Bend. I would need to get back on near Ollalie Lake, nearly a 3 hr drive. Leaving Bend in the afternoon, my hope was just to make it to the trail by nighttime. I was really fortunate- I got there with three hitches. First, a young couple who did the PCT as their honeymoon a couple years before AND I got to sit next to their adorable sleeping baby (: They could only take me 15 minutes, to a better hitching spot, but it was less than 15 minutes of waiting before I was picked up my a nice woman and her teenage son and daughter and adorable pup! They got me close, to Detroit, where I was very lucky to run into another hiker who’s mom was driving him straight to Ollalie Lake.

Even with this great hitching luck it was still getting dark when I got to the trail, and I was very glad I hadn’t waited any longer to get moving. A few other hikers were camping there and I had dinner with them, breaking in my new stove.

This stretch felt odd at first not only because I was missing Louise, I was also missing every other hiker who had been near us for the past month. I had taken a couple zeros in Bend and got passed by some this way, and the huge detour really scattered everyone. People were getting back on the trail at different places (many hitched to Government Camp, 50 trail miles north of Ollalie) and some (like Atlas, Ladybug, Arvid, Lydia, Rhino, and some other Swiss friends) were walking around the fires on the highways. So I saw few hikers at the start of this stretch and none that I already knew.

Walking by myself was so different. Choosing my pace was nice. I think I could let my mind wander more easily. I listened to music. Still, sometimes I was bored- and fidgety, as I had started using my poles less. Out of all of these elements came something new and interesting: trail crafts!

The section I was traveling through had a lot of Old Man’s Beard (moss hanging from trees that looks like beards), and I began spinning it into rope or twine as I walked. With that I could make other stuff. This was so fun- it gave me a creative outlet I had been really missing on the trail, but it also slowed me down a bit, so I couldn’t do it all day.

So sometimes spinning moss, sometimes listening to music, and sometimes just plain walking, I made my way through bearded woods and by some lovely lakes in Mt. Hood National Forest. After two days I was camped just 5 miles from Timberline Lodge on Mt Hood, an iconic lodge known by all hikers for the breakfast buffet.

It turned out to live up to the hype, at least for me. The building was so cool, with an amazing view of Mt. Hood. And they were very nice to through hikers. Approaching the fancy Cascade dining room, even in my cleaner and less stinky sleep clothes, I felt out of place. But despite the fact that the tables were almost all full, the host directed me to my own table, as if I was any other customer. At some hiker-frequented eateries, I’ve been lumped with other hikers, whether I knew them or not. I was then greeted by my server and told I could hit the buffet as many times as I wanted. It was bliss.

Afterward, I found a nice spot to charge my things and blog in the massive main lobby, and by mid afternoon I was ready to be on my way. Cascade Locks, my next resupply, was 50 miles away and I just wanted to get there before 5 two days from then. That would be easy to make, so I just shot for just 10 more miles.

The next couple days, I enjoyed some amazing views, something I had been missing most of Oregon, both because of less dramatic terrain and the smoke. The day before I got to Cascade Locks I saw my first clear blue skies since I got to Oregon. In one segment of trail I was able to see Mt Hood behind, and Mt St Helen’s, Mt Adams, and Mt Rainier ahead. I was also able to see plumes of smoke from the Indian Creek Fire and the helicopters toting massive 340 gallon buckets of water from nearby Wahtum Lake to dump on the flames.

Finally, around noon the second day after I left Timberline, I arrived at Cascade Locks, a small town on the Columbia River. I was very excited because Louise had gotten me in touch with her friend Maddy and her friend’s mother Kathy who live in Hood River, very nearby, and they had graciously offered to host me.

Kathy picked me up from Cascade Locks and took me home and treated me to a thru hiker;s dream visit. Shower, laundry, food, sitting on the couch, tv, food, a bed…. and then the next day all these things again. And not just food but pancakes! The best pancakes I’d had all summer. I was so spoiled. I was also lucky to be there on a night when Maddy was singing at a nearby fancy hotel. I borrowed a dress and got to go watch and hang out with half the adults in Hood River- Maddy’s friends parents and Maddy’s parents friends- who all came to watch Maddy sing.

At Maddy’s house I was also able to finish my gear shuffle, having received a package with gear from home that Louise sent. My tarp, a different sleeping pad, and more cold weather clothes. After a whole day off, I was dropped back off in Cascade Locks, ready to get back on trail once I had completed another blog post. (Getting back on trail ended up taking much longer but I’ll save that for the next one) 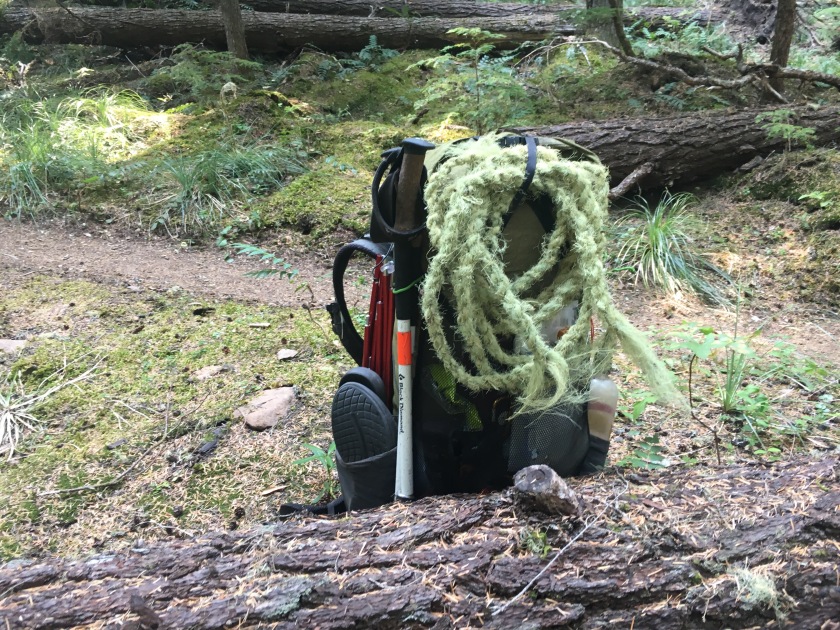 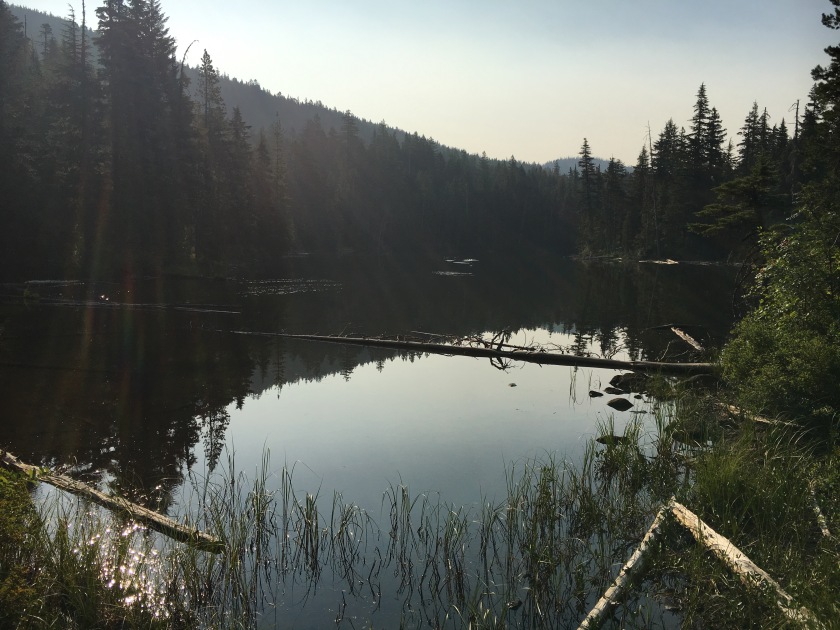 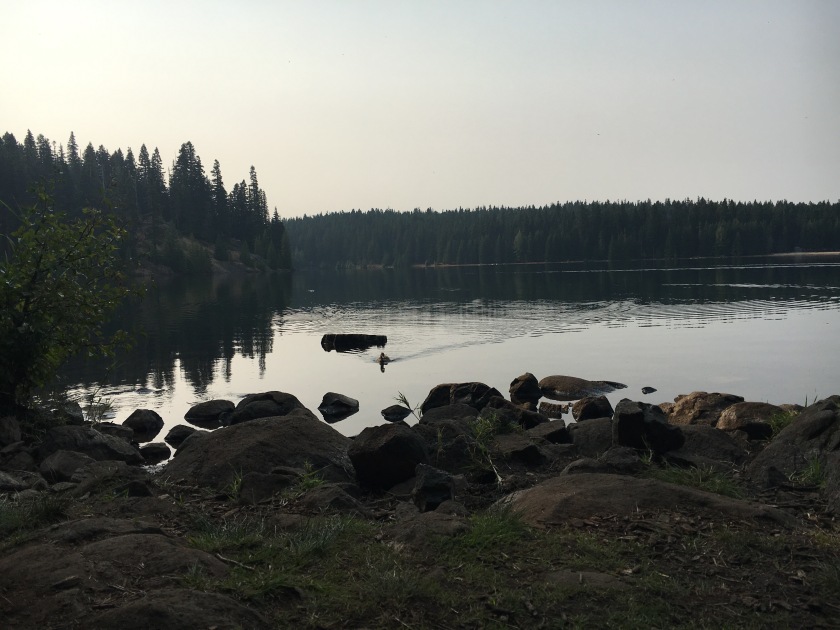 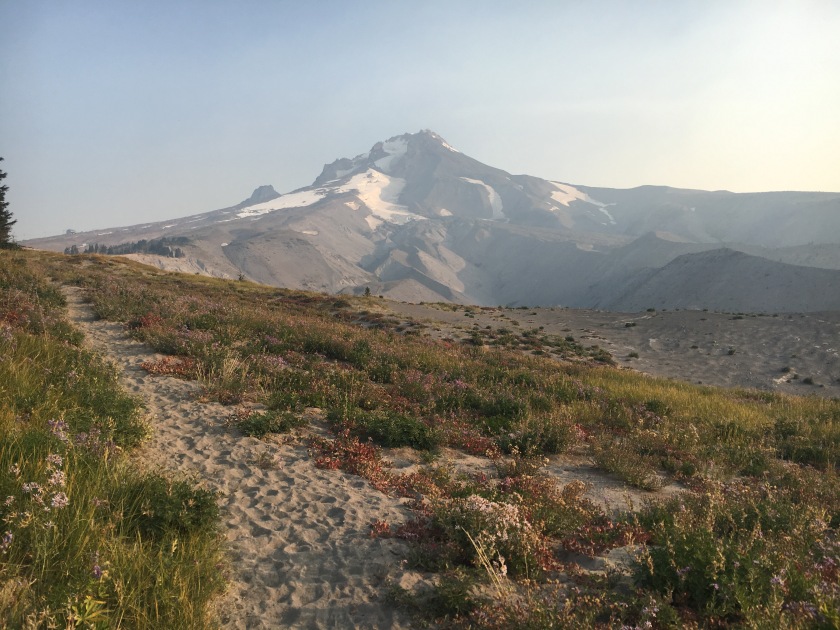 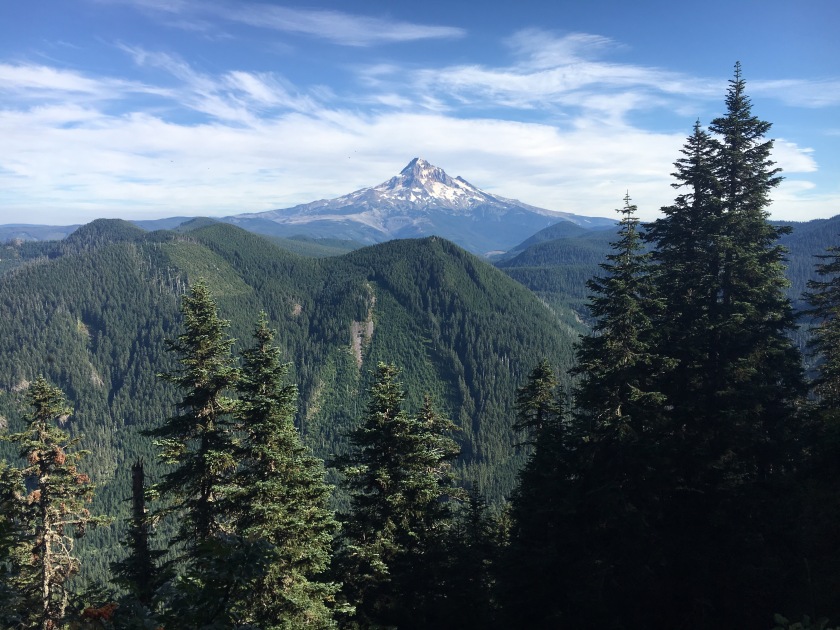 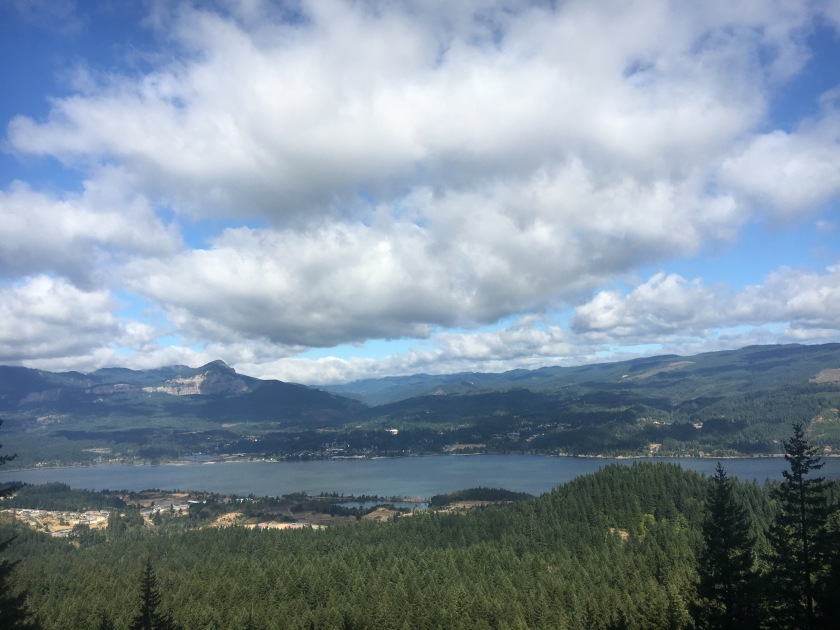 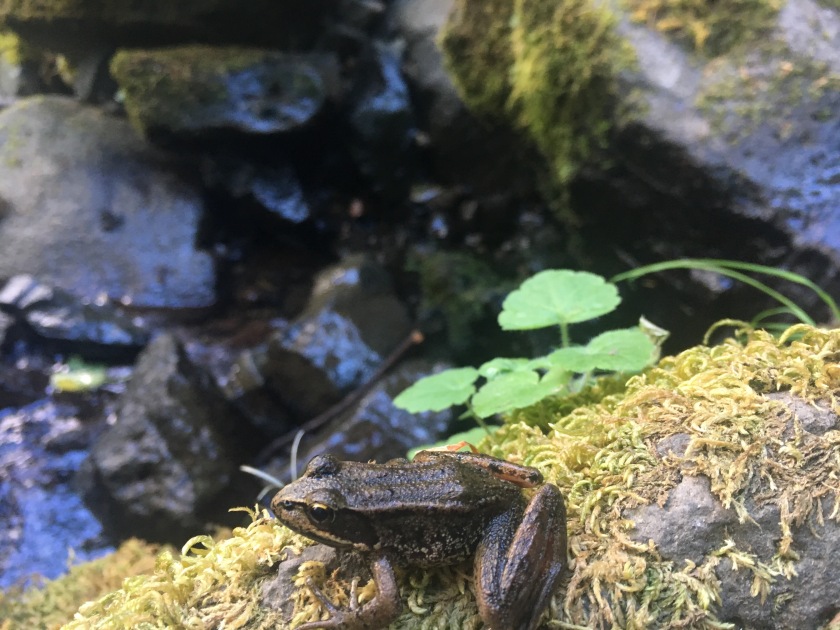 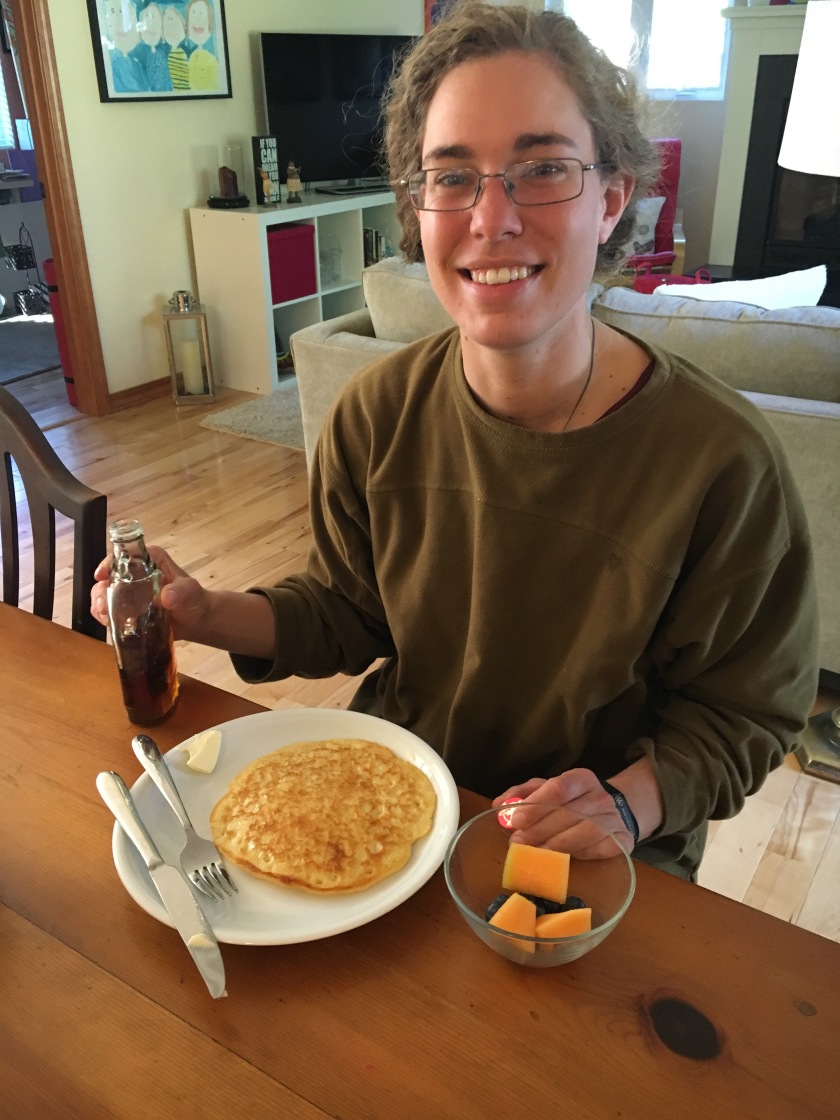 One thought on “Stretch 16: Ollalie Lake to Cascade Locks”