During last stretch, I gained a new appreciation for the most basic comforts of civilization. In previous stretches, I found myself longing for certain foods, a shower, cold drinking water, a chair–but never before this stretch had I so ardently wished for a roof and walls. So our criteria were pretty low for a place to stay at Steven’s Pass. When we got to the Mountaineer’s Lodge, with heat, electrical outlets, hot showers, beds, and best of all, a gear drying room, with hanging rods, shelves and warm, dry air circulating, we were over the moon.

We hung almost every item in our packs in the drying room, showered, ate, even found a ride to check out nearby Leavenworth. But more than anything, I enjoyed sitting on the couch in the cozy common area. I thought that 5 months of hiking would have prepared my body for anything, but after the cold and dramatic elevation changes of the last stretch, I found myself very sore, especially going down stairs. In the four-storied lodge my aches were all too apparent, to me and everyone else, as I teetered down the steps sideways, lowering both feet to the next step, one step at a time. There was a group of UW physics grad students also staying there for a weekend hiking retreat, and I’m sure that if any of them had an idea of what they thought a thru hiker would be like, I was not it.

We enjoyed ourselves, but with Canada still 180 miles away, we couldn’t relax for too long. So after 18 hours off-trail, we returned with dry gear and 5 days of food for the 109 miles before our next resupply in Stehekin. The sun was shining, and we felt very lucky that the forecast was mostly dry for the next 5 days. With the nice weather, and as it was the weekend, the trail was crowded. Something gave us away as thru hikers, and a handful of groups stopped us to ask questions about our trip. I’d be lying if I said we didn’t enjoy the attention, but all this chatting slowed us down. After 12 miles, though, the crowds thinned out, and once again, the trail felt like ours.

At this point, my cold was merely an annoyance, my nose stuffy then runny, and my ears unable to adjust to our changing elevation. Atlas, however, was not feeling well. He’d remained remarkably not sick so far, through my stomach bug and then cold, so it felt unfortunate but inevitable when he woke with a sore throat at the Mountaineer’s Lodge. But it escalated quickly. Throughout the day he felt dizzy. And when we made it to camp at dark, it was clear he had a fever. I was very concerned, wondering even if we should continue, but he assured me that he frequently had a fever when he was sick, and he could continue as usual.

I had to take him at his word, but still I was unable to drag him out of the tent at a normal hiking time. A natural morning person, that was usually my role. But I couldn’t do that to a sick person. So that day, and the following days, we started hiking pretty late, around 10 or 11. This really made it difficult to reach our 20+ mileage goals for each day, as it was becoming dark shortly after 7, and we could not travel very quickly on the steep and often uneven terrain of this stretch.

It was easy to become stressed thinking about our finish date, but early on, I decided to accept that we would not reach Canada when we’d hoped. It was very far from ideal, because of the imminent winter weather, and for Atlas in particular because he would have very little time after finishing before returning to Hungary. But I did not want to spend my precious final days on the trail stressed about this when there were so many things to appreciate. Except for one day, the weather nice. And it was beautiful! Stunning views at every crest, crystal clear alpine likes, rich fall colors, and again, almost no other people. Given our tired bodies and the cold and Atlas being sick, we enjoyed it as much as we could.

The day before we reached Stehekin, I started to feel not great. It was subtle–a mild headache and unusual tiredness—I couldn’t be sure that it wasn’t just all the hiking taking its usual toll on my body. But that night, I had no appetite. I’d eaten enough Knorr rice sides on the trail that they were not the most appetizing on a normal night, but this night Atlas had to really push me to take a few bites. The next day, as we descended the final 12 miles into Stehekin Valley, I felt bad.

We reached the High Bridge Ranger’s station in time to take the 12:30 shuttle to Stehekin, 8 miles away. Our plan was to pick up the resupply package, shower, do laundry, sort out some transportation details, and get back on the trail that evening. We had just enough time to accomplish these things before the last shuttle back, but I felt very uncomfortable about returning to the trail. We decided to stay the night in Stehekin.

This turned out to be a good decision. That night was miserable. I went from feeling ‘kind of bad’ to ‘very terrible’ quickly. First I was too cold, even in a warm room, under the covers. Then I was too hot. Usually when my fever is only a couple degrees I can’t be sure without a thermometer. But I felt I was burning. I laid in a tepid bath. I drank a bunch of water, but in the middle of the night, it started flowing right through me. Along with not much else, as I had eaten very little the past 24 hours. I lost so much liquid I didn’t know how that much could have been in my body. I barely slept.

By the next morning (of my birthday), my fever had broken, but I felt so weak. Water and food were not staying in me. There was no way I could get back on the trail. Atlas and I were in a tough spot. He couldn’t delay getting back on the trail indefinitely, as he had flights booked out of the country. I didn’t know how long it would take me to regain my strength, and I couldn’t wait it out in Stehekin, where lodging was expensive. It was very hard to accept, but I needed to go home, and he needed to keep hiking. With that decided, I still needed to figure out how to get home.

Stehekin is on a lake, 4 hours by ferry from Chelan, which is a 3 hour drive from Seattle. With no cell reception or wifi, I had to rely on a payphone to make a plan. I never pick up calls from ‘Unknown’ and hate getting voicemails, so I expected making arrangements to be a big hassle. Thankfully, all I had to do was call my parents. My mom got in touch with my housemate Rachel, who got approval to leave work early in order to meet me that night at the ferry dock in Chelan. To make the long drive at such short notice without hesitation, Rachel was my hero. I could have had no better birthday present than that.

So that was it for me and the trail, this year at least. Even if I felt better in a few days, already more rain and snow was in the forecast. I did not want to go back into that, especially without Atlas. Missing the final stretch wasn’t hard. I know I will get to do that stretch at some point, along with the couple other stretches I missed. It was difficult to let go of reaching the terminus with Atlas, who I hiked with for nearly a thousand miles, and for whom the terminus was the end of a continuous hike from Mexico to Canada. This year, with the extreme conditions in the Sierras and the many wildfire closures, very few hikers achieved a continuous hike. I don’t know numbers, but I would guess fewer than 50.

But as I got better, I decided that just because I wasn’t doing the stretch didn’t mean I couldn’t be there at the northern terminus. I had planned to pick him up from Manning Park in Canada, the nearest exit point from the trail after the terminus. It was an 8 mile hike from the trailhead to the terminus, so I decided to do the hike and meet him there. I had left him with my SPOT PLB and GPS tracker that my parents had used to track me. It allowed me to know when to pick him up.

He made excellent time on the 80 miles without me, and less than three days after we parted, I was headed to Canada to meet him. I got up very early to ensure I could make the three and a half hour drive and 8 mile hike before 11, the earliest time I thought he might reach the border.  I brought with me a cupcake and a Hungarian flag. I had a great plan to leave the cupcake on the monument with the flag in it and hide. There was a huge flaw in this plan that didn’t cross my mind until I was there: chip monks. It was too late, though. I was already attached to this idea. So I spent two hours defending the cupcake from a distance: waiting out of sight from the trail, with a stockpile of rocks, chucking them at any little critter that make an attempt on my cupcake. I felt ridiculous, but it was good to have something to do while I waited. It was extremely cold.

Eventually Atlas arrived and was very surprised to see me.  We took pictures and celebrated. Completing the whole trail is a big deal for anyone, but he was also the first person from Hungary to do it. By the time we left I was ready for it. It was so cold!  We stopped at Manning Park Resort to take advantage of their special offers for thru hikers: free soda and free use of the pool facilities, which include a hot tub, sauna, and steam room. Eventually, we headed out, and I was able to give a ride to two other hikers headed towards Seattle: Zoro and Swede Racer. We stopped for dinner and to drop them off, and when we finally arrived at my home in Seattle, it had been a very long day.

Overall, the last stretches were not at all like I had imagined. There was bad weather, I got sick, we were slower than expected, then Altas got sick, then I got sick again… Despite all that, I’m not unhappy with the ending, and other than maybe bringing better rain gear, I would do it all the same. There is so much you can’t control about a thru hike. To enjoy things, you just have to be able to adjust.

So thats the end of it for this year, folks. If I’m able, I’ll be back at it next summer. Here are some pictures. 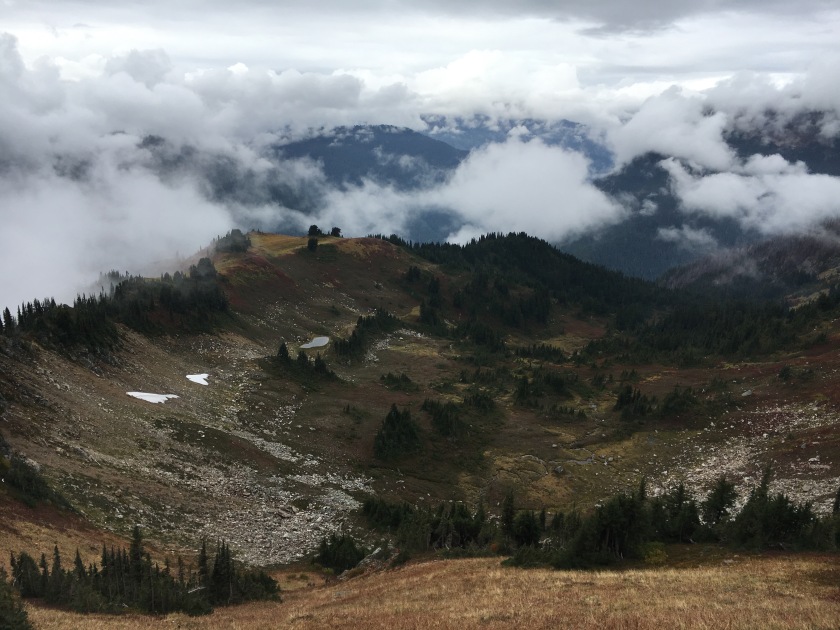 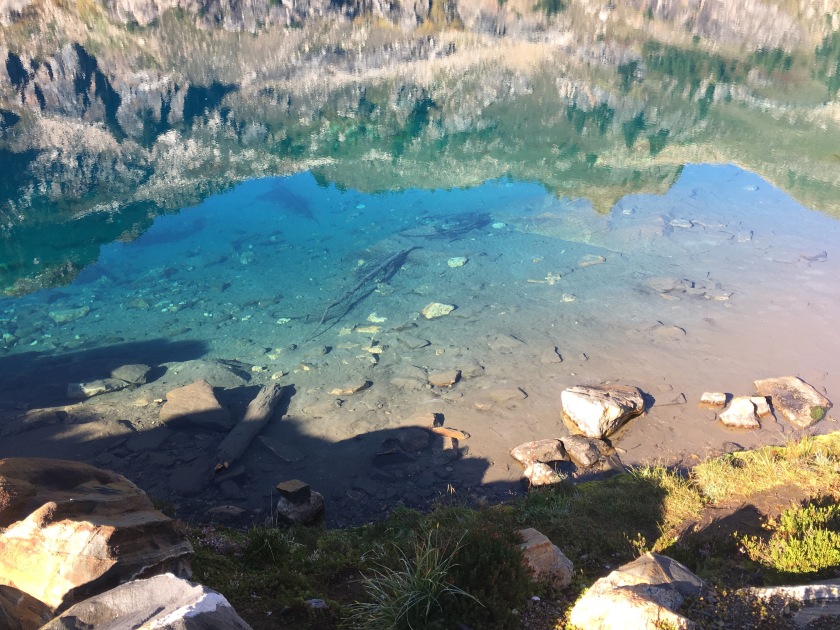 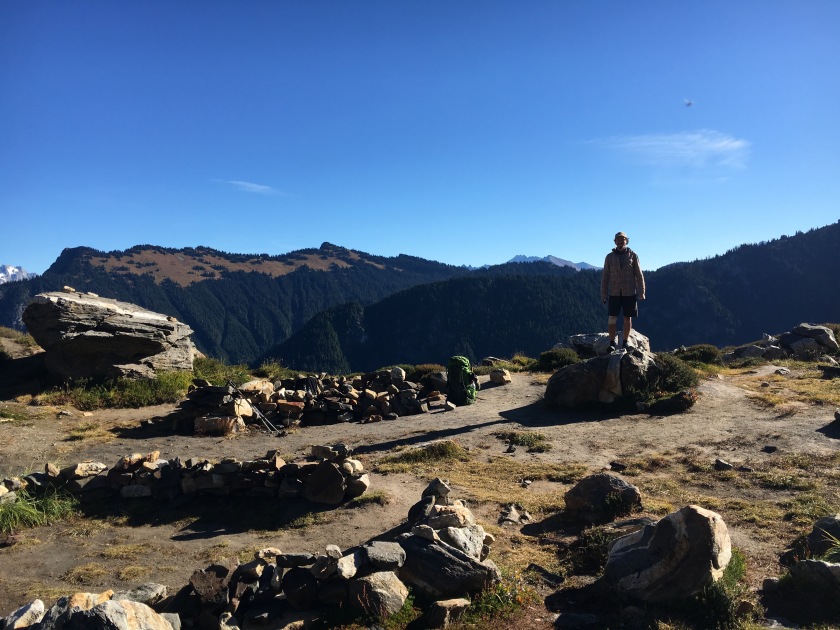 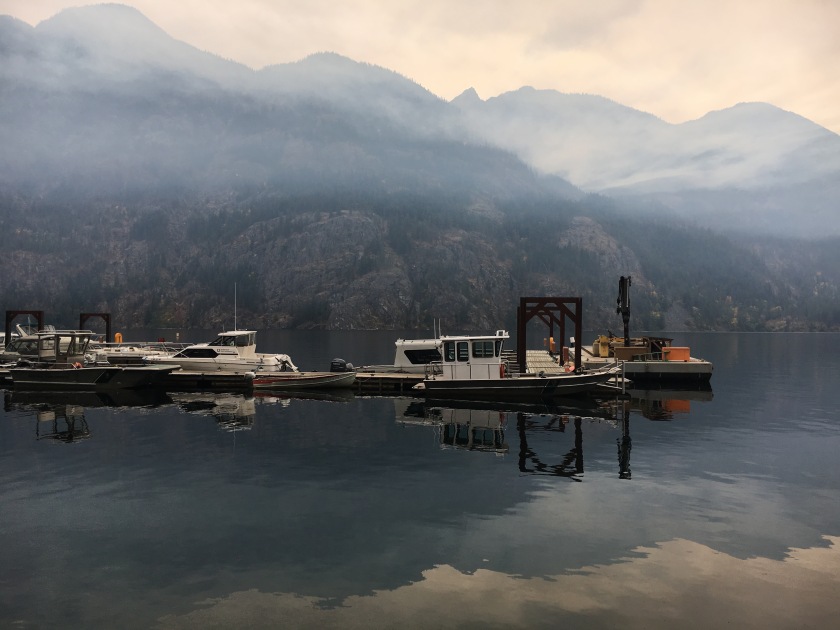 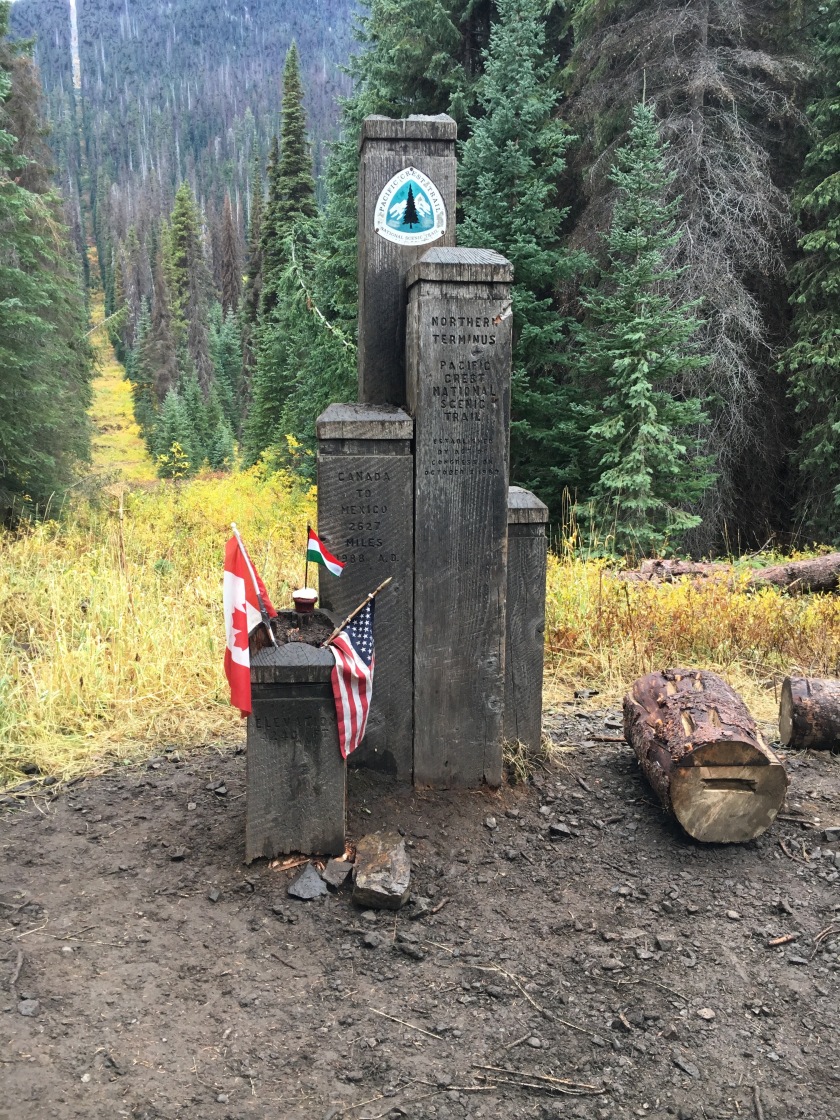 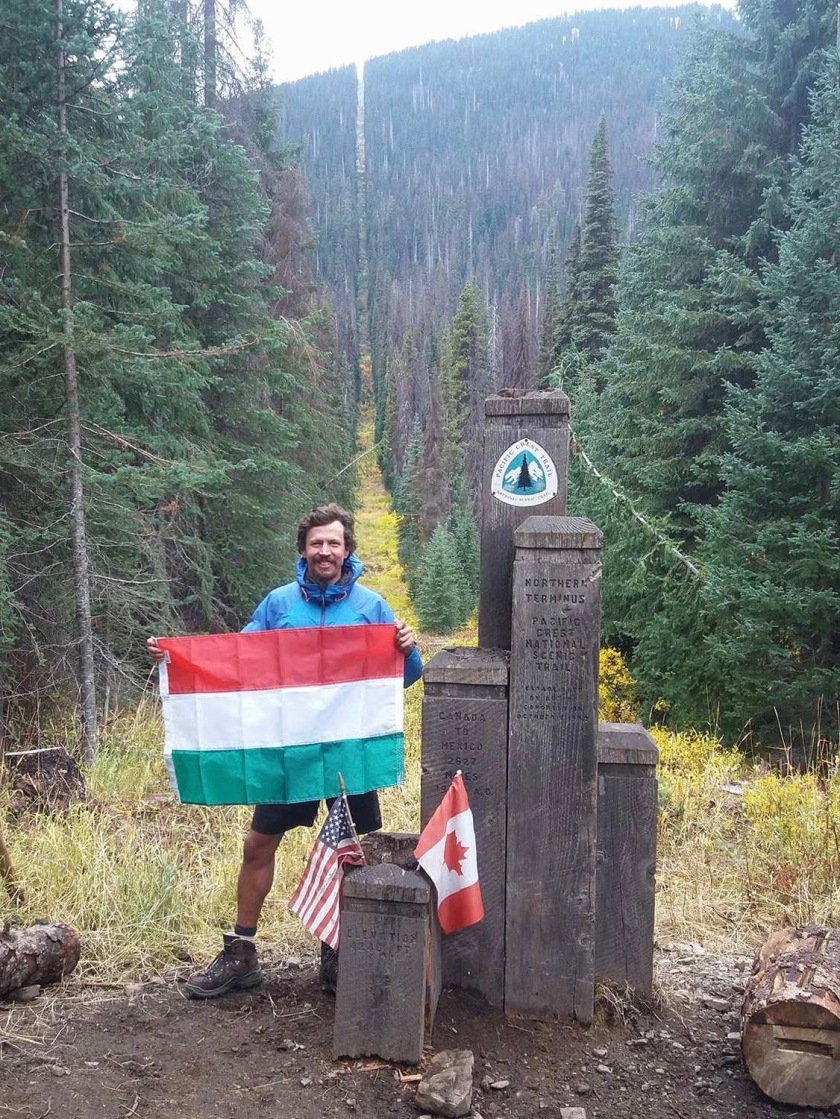 5 thoughts on “Stretch 19, Steven’s Pass to Stehekin (and The End)”